As I've mentioned before, Florence holds a special place in my heart. So you can imagine that I was a little bit disappointed that our time there didn't quite go as planned.

Our first challenge: We were exhausted. We had been rush rush rushing for 10 days by the time we got to Florence, and we just hit the wall when we got there.

Our second challenge: The weather was still ridiculously hot and humid!

We still managed to see what we wanted to in Florence, and I wouldn't have skipped it for the world. But I didn't get to show off the city in the way I had wanted to. 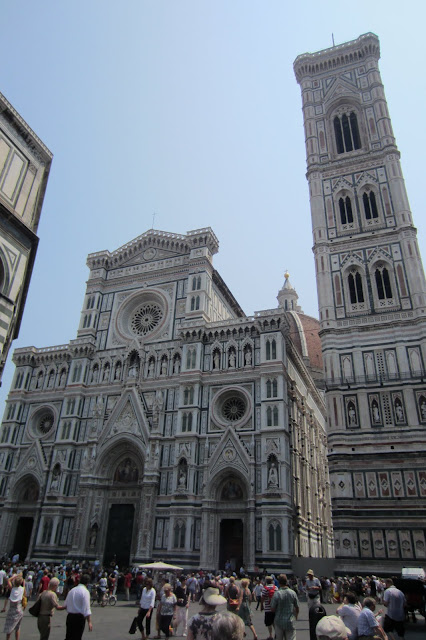 Florence's Duomo - the photos never really do it justice!

If you'll remember, I had a rough outline sketched out for our time in Florence. It included the Uffizi and a mega walking tour of all of my favorite spots. Shorty & M did end up going to the Uffizi, and we did get to see quite a bit - including the Duomo, the "fake David" in Piazza della Signoria, the Ponte Vecchio, Pitti Palace, and my old neighborhood and apartment. 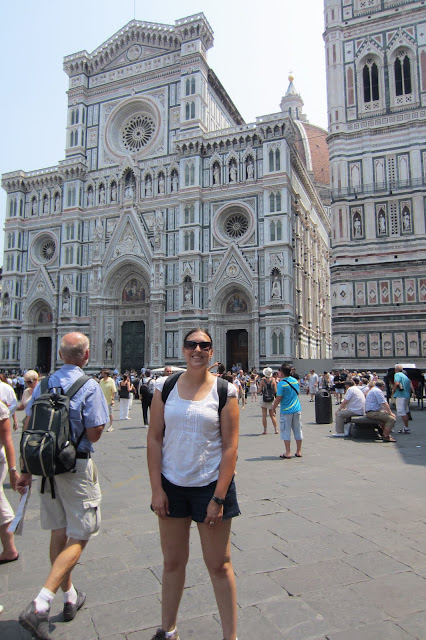 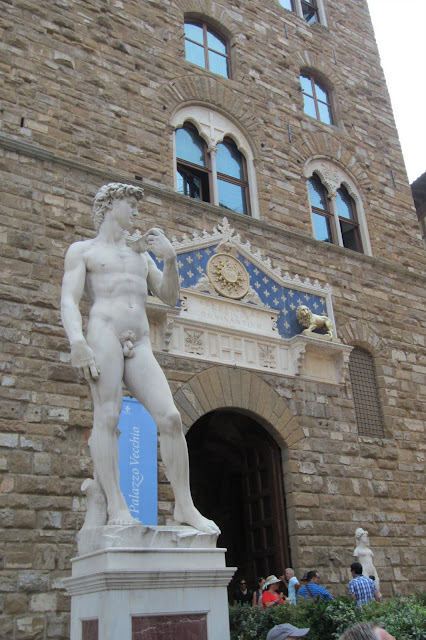 The "fake David" statue in Piazza della Signoria - the real one originally stood there, but was moved to The Accademia museum in 1873. 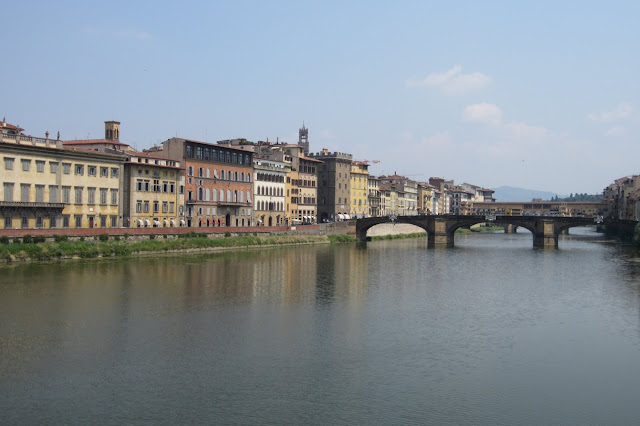 View of "my bridge," Ponte Santa Trinita - it's the one I crossed every day for school - from the Ponte Vecchio.

While the girls were at the Uffizi gallery our first afternoon, BF and I took a much needed nap, then wandered around a little bit. We met up with the girls at the hotel, and I took us to dinner at Eby's.

Eby's is one of my favorite spots in Florence to eat. Sweet Candy and I stumbled upon it while walking from one bar to another late one night, and were immediately impressed with Eby's drinks, burritos, and crepes. He makes his own tortillas and guacamole, and after much begging, taught the guacamole recipe to Sweet Candy. 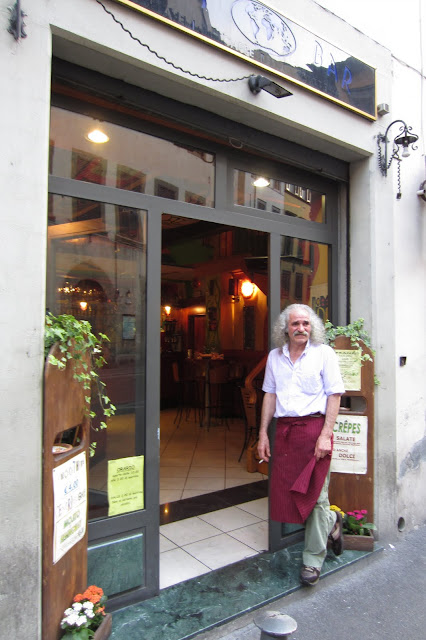 Eby himself taking a break outside of his place.

We didn't end up going to two of my favorite places in Florence - Boboli Gardens (at Pitti Palace) and Piazza Michelangelo. We didn't go to Space Electronica, and my favorite bakery of all time had (recently) gone out of business by the time we got there. And we didn't get a chance to go to the top of the bell tower for amazing views.

However, there were a couple of things I had kind of forgotten about that we did get a chance to see & do - the central market and the San Lorenzo street market. We also went by the bronze boar and rubbed his nose (ensuring a return to Florence).

Our second day in Florence was the day we went on our super long day trip to Pisa & Riomaggiore, so by the time we got back to Florence, we were just wanting to relax. We did a loop of souvenir shopping in the San Lorenzo market, and I bought my favorite purchase of the trip - a gray leather purse. If you're after leather, Florence is the place to look. I had wanted to buy something nice for myself on the trip, and this purse was the perfect item!

After dinner, we did a night stroll of some of the sights, then it was off to bed! 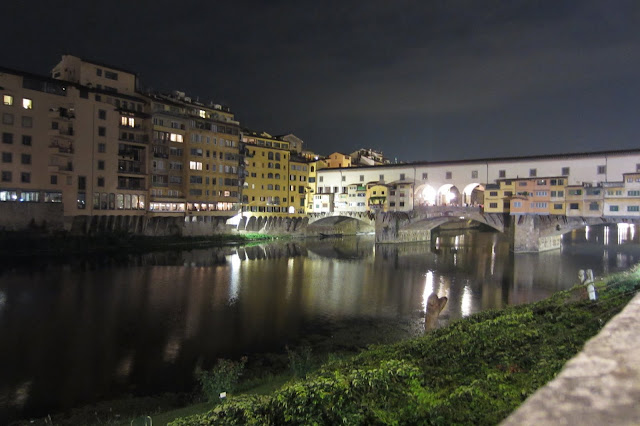 The Ponte Vecchio by night - I really love wandering around cities at night - there are so few people and everything looks so peaceful! 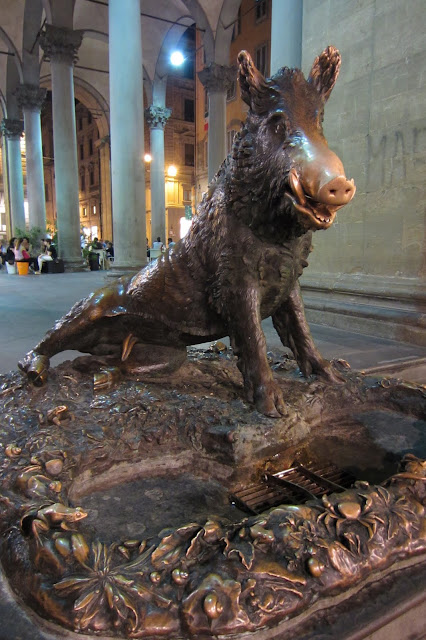 Also on our last night, we discovered that the Leonardo Da Vinci exhibit of inventions was in Florence! I saw this exhibit when I was in Venice in 2004 - it was in this random church, entrance was free, and it was really cool and interactive.

We decided to take a later train to Rome the following day so that we could check it out. It's still very cool and interactive, but now it costs a few Euro to enter. It's completely worth a visit, in fact was one of the best things we did in Florence. 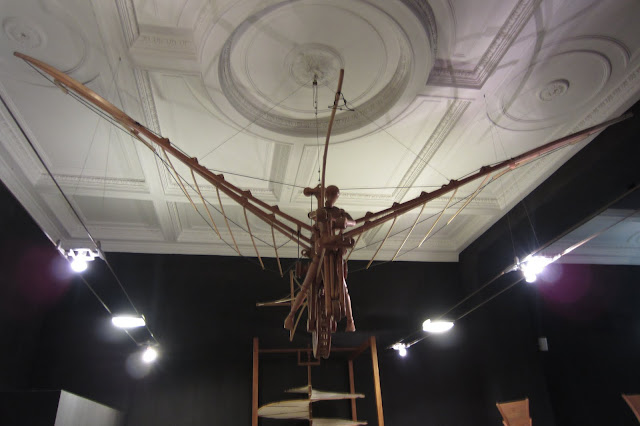 A replica of Da Vinci's flying machine. The best part about the museum is that many of the exhibits are interactive!

After the Da Vinci museum, we did a final pass through the San Lorenzo market and picked up the rest of our souvenirs. It was a good thing, too, because everything in that market was about 50% less than the same items cost when we got back to Rome!

TRAVEL TIP: Rome is CRAZY expensive! Unless there is something very specific you want (like a "SPOR" magnet or something), buy your souvenirs in another city. If you couldn't tell, my favorite spot is the San Lorenzo market in Florence. I've gotten everything from t-shirts and magnets to purses and kitchen knives there!

Shopping done, BF and I grabbed a cafe latte at the bar down from our hotel, then we were on our way to the train station to zip back to Rome. 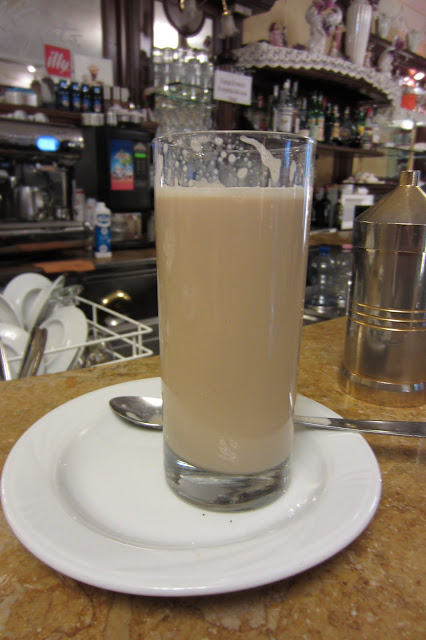 I love that lattes in Italy come in tall glasses like this one.

We decided to take the fast train (half the time, but twice the money) to get back to Rome, and then did a final loop of Rome on the "hop on, hop off" bus. 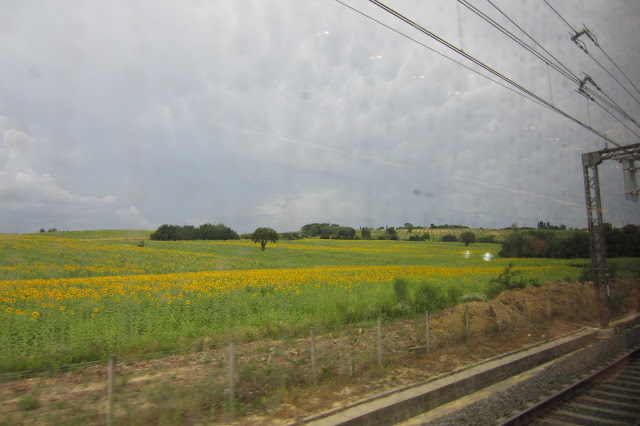 Fields of sunflowers from the train.

And that concludes our epic trip! It was an amazing experience, and I was so happy to spend every second of it with BF, M & Shorty! Watching SAY and Dr G get married was also pretty awesome.

Favorite moments of the trip? The cliffs in Ireland, driving on the beach in Ireland, the entire chunk of days (including the wedding) in Siena, Corsano and San Gimignano, the Da Vinci museum, and the night time walks we took in Rome & Florence.

Not sure if we'll do another trip like this one - it was a huge undertaking, and wasn't very relaxing - but I don't regret a second of it (or a dollar spent)!
Posted by addy at 1:42 PM

Labels: europe, florence, italy, places I've been, things to do, travel photos, travel tips, where to eat, wish I was there