After the stunning Tuscan wedding, there were only a few short days left of our trip, but boy were we determined to make the best of them!

SAN GIMIGNANO
The first stop was San Gimignano, which I was SO excited to share with SAY, M and Shorty. See, I'd been talking about this town since I'd first been in 2003 (on the trip where I met BF), and we were all really looking forward to it, and to having a night in a small little town where SAY and Dr G could decompress after the craziness that is planning and executing a destination wedding in Italy! 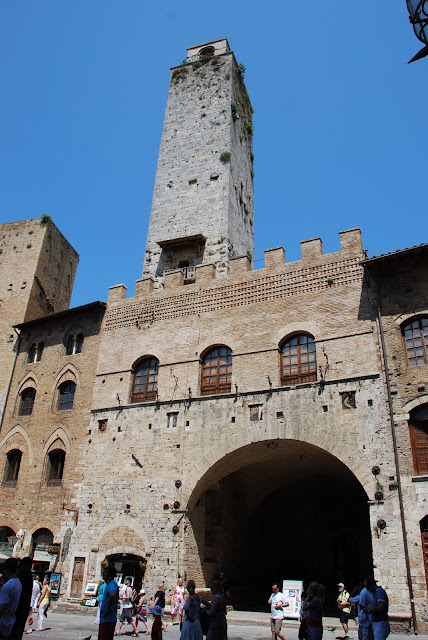 We found our hotel and went exploring. San Gimignano has one main "strip" and then tons of tiny side streets with shops and restaurants and piazzas. After a leisurely lunch (because leisure was the name of the game in San Gimignano) and some gelato, we decided to go up the tallest tower, Torre Grossa. 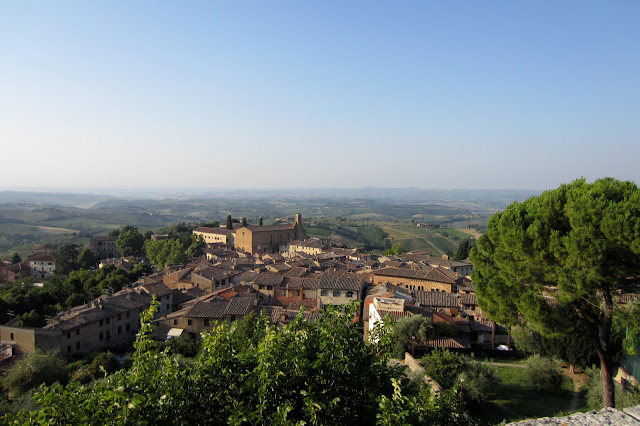 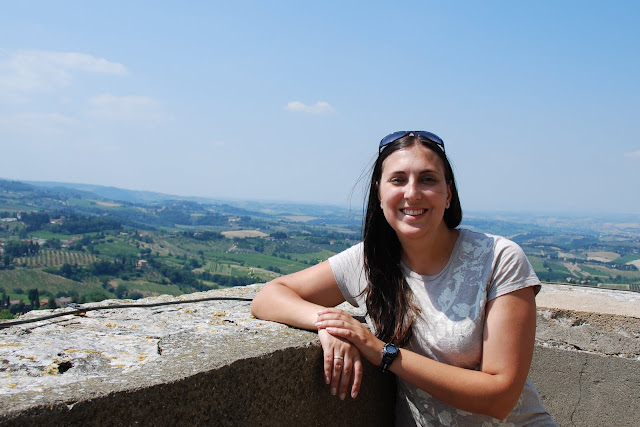 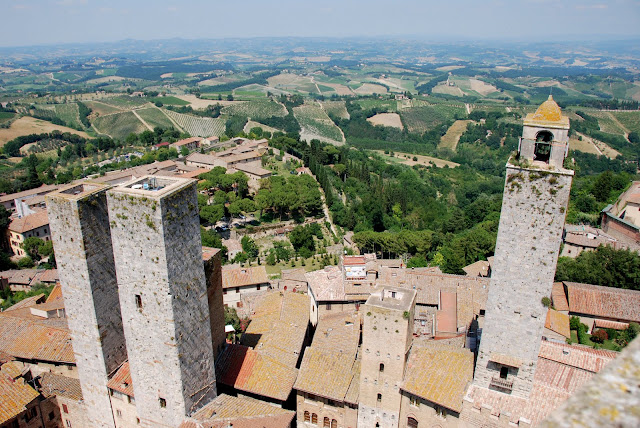 After more gelato, we decided it was nap time - it was still really hot and humid, though slightly less so because there was a breeze on the hill. After our naps, we met for dinner in one of the main piazzas of town. We ate overlooking the piazza and people watching, and then after even more gelato, took another nighttime stroll around the streets. 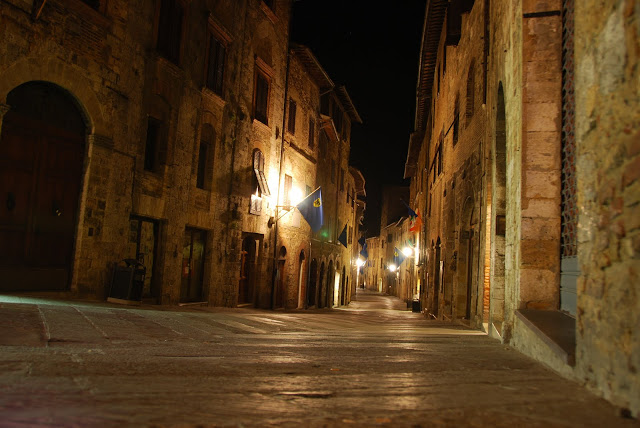 TRAVEL TIP: Staying overnight in one of the smaller towns that people usually do as day trips can be a really fun way to experience the "real" Italy. San Gimignano is a very touristy town, and was really lovely in the evening when the tourists left and all of its residents came out!

PISA
The following morning, we were off to Florence for a few nights. Florence will get a post of its own... but while we were there we did a long and rushed day trip to Pisa and the southern-most town of Cinque Terre, Riomaggiore.

For me, the leaning tower of Pisa is one of those sights that you should see once in your lifetime. BF and Shorty had never been, so we made the requisite trip from Florence. It's a 45 minute train ride, then a 20 minute walk through Pisa, and then there you are. 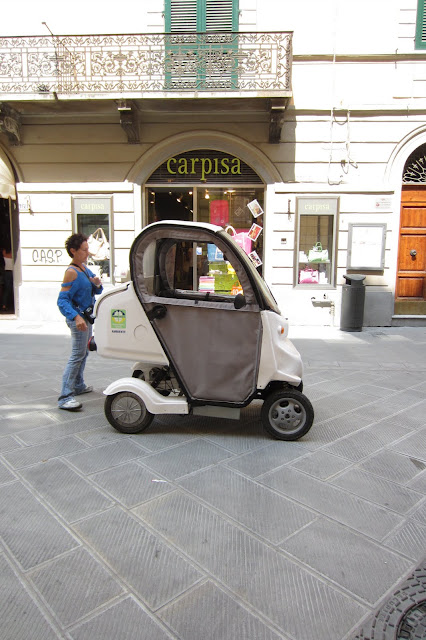 It looked really cloudy and dark, but it was actually SUPER hot and humid. So humid, in fact, that we were sticky and cranky by the time we got there, and ended up taking a cab back to the train station. Where we ate lunch at McDonald's, because we were just craving those fries... don't judge!

RIOMAGGIORE, CINQUE TERRE
After lunch it was onto another train to La Spezia, where we hopped aboard the final train to Riomaggiore.

Let me just say it now: Cinque Terre is stunning.

It was absolutely beautiful there. We explored a little bit, finding the marina and the steep hills of the town, and even following a path to the "beach," or, a tiny cove covered in rocks instead of sand. 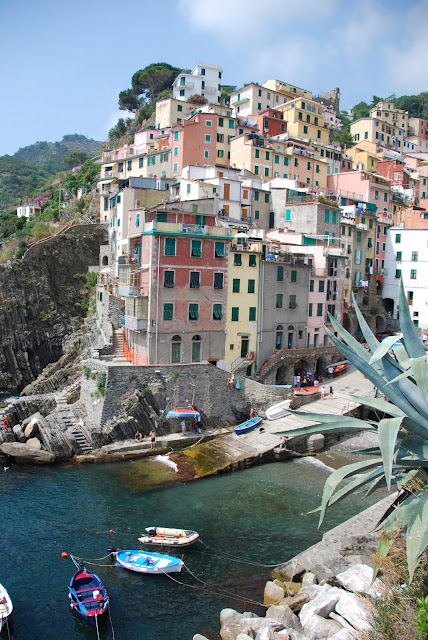 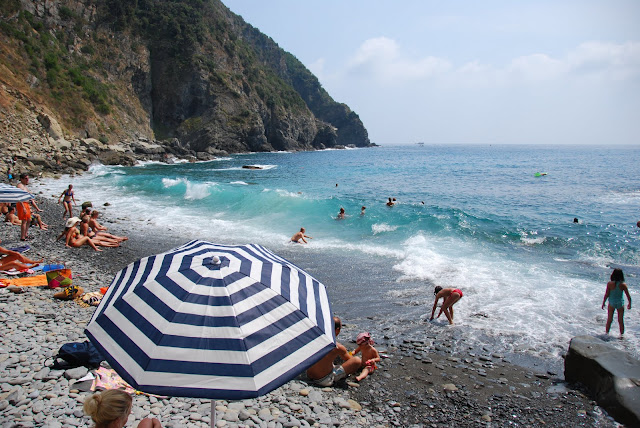 We had planned on walking up the "Lover's Walk" to Manarola, the second of the five towns, but then we got to the beginning of the walk and realized it now costs €5 to do the walk!

We only had an hour before our train was scheduled to leave, and we were hot and tired, and had already spent a ton of money on the trip, so we ultimately decided to not do the walk. In hindsight, I regret not doing it. On my next trip to Italy, I plan on scheduling at least one night in Cinque Terre, which will make the fee more than worth it.Instead of doing the walk, we made our way back to the train station, ate some ice cream, and hopped on the first train we could find back to La Spezia.

Travel tip: When traveling by train in Italy, it's important to validate your tickets at one of the yellow boxes at the stations before getting on the train.

We forgot to do this when we left Riomaggiore and almost had to pay a €200 fine! Fortunately we talked our way out of it and just paid a €15 one instead.

It had been an incredibly long day when we finally got back to Florence - while Pisa and Riomaggiore were worth the trip, I think next time I would do them separately.

I'm in the cinque terre right now. It's nice reading your post. Thanks for blogging : )