Over the course of our 14 day, 13 night trip to Europe last summer, we stayed in six different hotels and one villa. That's a lot of hotels!

I spent a lot of time on TripAdvisor prior to booking to research where we would stay as much as possible, and 6/7 of the places we stayed were great.

Since we were trying to keep to a pretty low budget, and our flights went about $500 over what we were expecting, we decided that we wanted to keep our total hotel budget under $1,000 per person, or around $150/room/night. With the exchange rate, this meant compromising on location or amenities in a few places.

Here's a run down of our hotels.

Cost: $142.64/room/night
Location: Great! Right smack in the middle of Donegal, within walking distance of sights, bars, restaurants, and sights. It's also perfectly placed for exploring County Donegal, within easy driving distance of some gorgeous locations.
Rooms: The rooms are a little bit dated, but they fit the bill with all the amenities, and were clean.
Service: The staff at the hotel was friendly and polite. They even let us call Dublin airport from the front desk to follow up on a bag that was lost.
Would we go back: Definitely. It was reasonably priced, perfectly located, and had free parking. 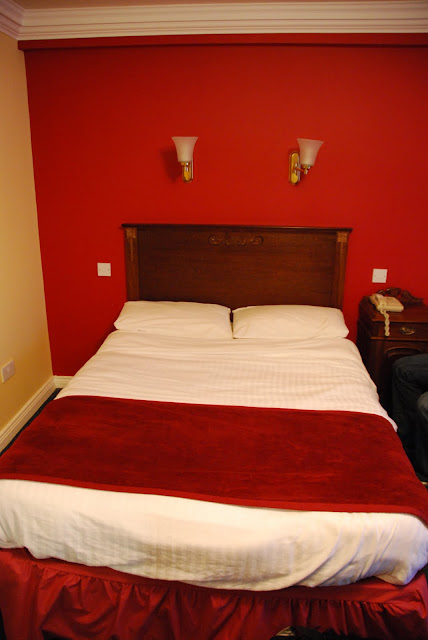 The bedroom of The Abbey Hotel. 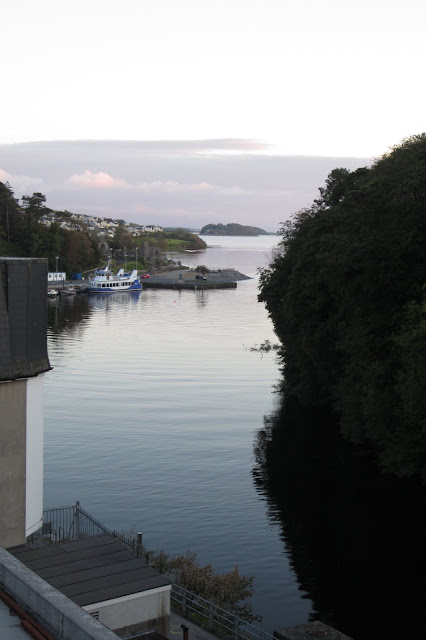 The view of the river behind the hotel - some of the rooms at the back of the hotel have this view!

Cost: $122.14/room/night
Location: Good. Not quite at the center of town, but it's within easy walking distance of many sights in Dublin. It's also far enough away from the Temple Bar to not hear the noise, which is nice.
Rooms: The rooms are clean and modern. Some of the beds in the king rooms are two twins pushed together, which is slightly annoying, and many of the bathrooms are different - showers vs bath tubs, etc.
Service: The first time I stayed at this hotel (in 2009), the service was stellar. This time, it was just ok. Some of the front desk people bordered on rude, but for the most part, they were friendly.
Would we go back: Yes. It's a good hotel, but I might try another next time if the price is right.

Cost: $132.43/room/night for the first two nights, $96.74/room/night for the last night
Location: Decent. The location wasn't bad - it was close to Castel Sant'Angelo, and about a 20 minute walk from the Pantheon. It was on a quiet street, with a sandwich shop and a bar with tasty coffee and pastries around the corner.
Rooms: As I mentioned in my TripAdvisor review, whether or not you got a good room was kind of a crap shoot. Some of the rooms were acceptable, some were not. A higher percentage of them were not.
Service: Two of the night staff were good, as was one of the girls that worked in the mornings. But many of the other employees were young and inexperienced with good customer service. For example, one kid had a very difficult time checking us out - it took him about 30 minutes to calculate what I was supposed to pay. I'm not exaggerating, it took 30 minutes for me to pay our bill.
Would we go back: No. This was the one hotel of the trip we struck out on. We were actually miserable on our last night - got no sleep, and the low price of the hotel didn't make up for it. 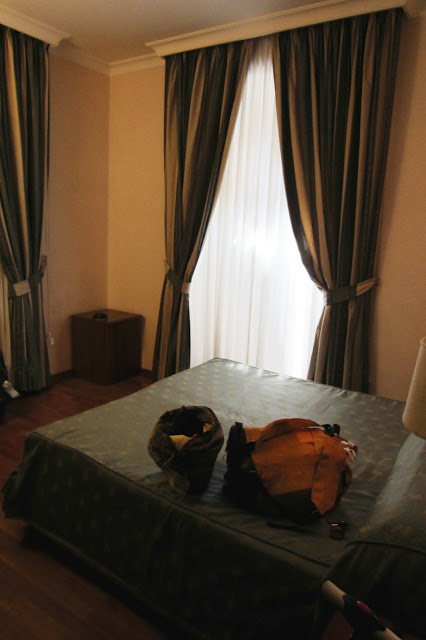 The second room we got on our first stay (we saw a total of five rooms) was pretty nice. 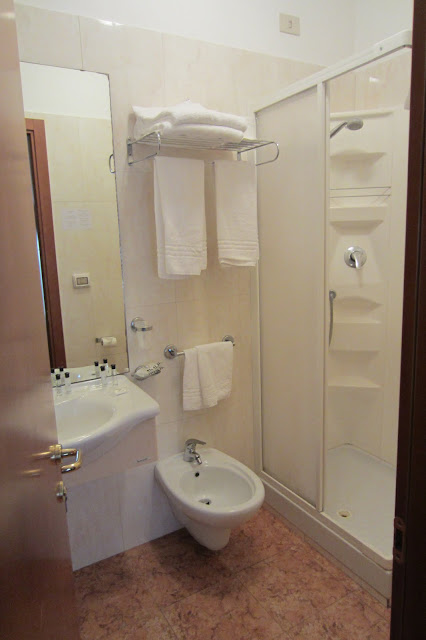 The only bathroom we had that was without mold.

Cost: $126.54/night
Location: Decent. A bit out of the way, but a quick 10 minute walk to the center of town.
Rooms: Awesome! Maybe it was just because we had been so disappointed with the rooms at the previous hotel, but these were great. Cool, clean, spacious, and the beds were comfy, too!
Service: All of the front desk people were very friendly and helpful.
Would we go back: Yes. It was a nice little hotel! 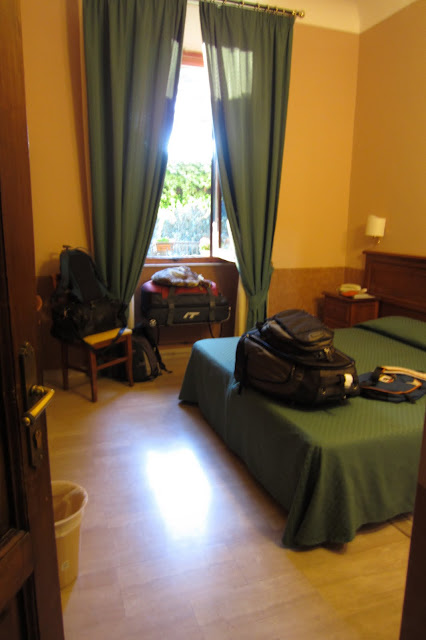 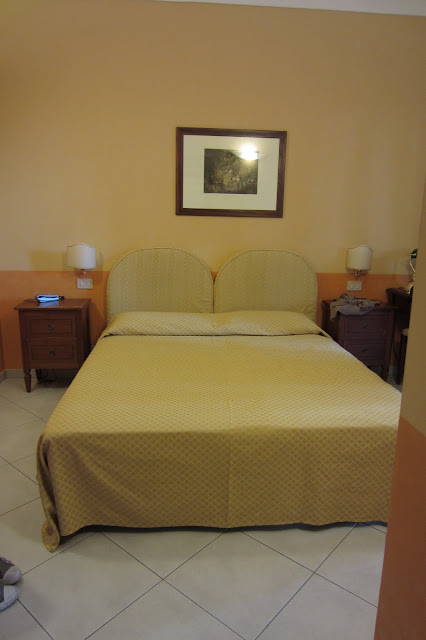 Cost: $200/night for four people
Location: Ok. It's terribly out of the way if you want to go to Siena, but if you want a place in the middle of a gorgeous Tuscan setting, it's great.
Rooms: We stayed in a two room villa that was just awesome. The rooms were cool and clean and everything was homey! The only problem we had was that the day of our friends' wedding we all four of us had to shower at the same time, and the hot water only lasted about a shower and a half.
Service: This place was pretty self-catering, but the family members who checked us in and out were super nice and friendly, as were the people at their sister villa, Tenuta di Corsano.
Would we go back: Definitely! We loved this place and can't wait to go back! 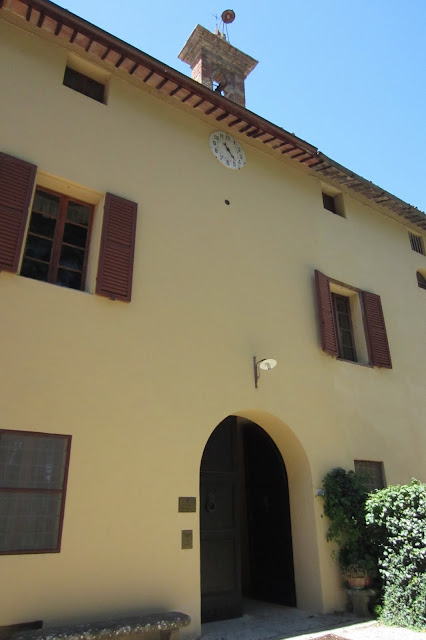 The outside of the villa - it was so lovely! It took us a few minutes to find it - it's the yellow one! 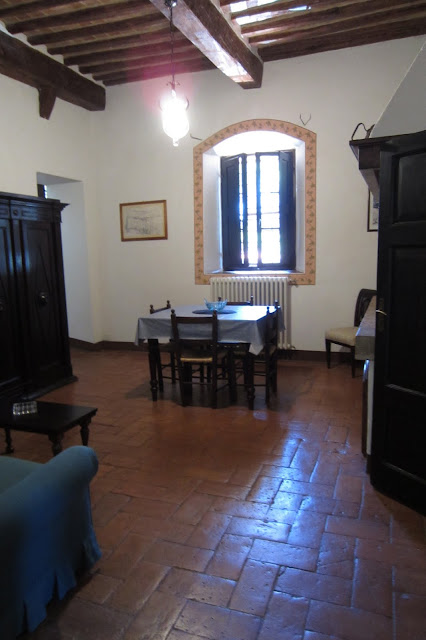 The living room of our apartment, the Berto.

Cost: $144.24/room/night
Location: Great. It was one piazza over from the city's main cathedral, and super close to a bunch of restaurants and a delicious gelato place!
Rooms: Good. They were clean, and the ac worked well, which was important! And the beds were some of the more comfortable ones we had.
Service: The front desk people were really nice, and even gave us free wi-fi.
Would we go back: Yes. I love the city, and it was a really good hotel for the money!

Cost: $169/room/night
Location: Decent. It's right in the "student" area of Florence. There are nicer areas, but since we weren't there very long and were planning day trips, we decided that being close to the train station was important. It was also very close to the Lorenzo market, which had great souvenir shopping.
Rooms: Good, but small. The hotel was small, but it was clean and comfortable.
Service: The front desk people were very nice - holding our bags for us when we got in a little early, and when we checked out before our train left.
Would we go back: Yes, on a short trip. On a longer trip, I'd rather stay in a different part of Florence, but this was a great hotel for our purposes.

In the end, we came in around $860/person for the 13 nights. I think that's pretty amazing, considering it was high season! Looking back, we wouldn't have minded staying somewhere a little more expensive in Rome to avoid the hassle of Hotel Sant'Angelo. But hindsight is 20/20, so we were ok with the choices we ended up making.
Posted by addy at 9:40 AM