Last October, I went to Toronto on somewhat of a whim. See, M's company was sending her there for work, and she asked if I wanted to go. I had always wanted to see Toronto (especially since they shoot a couple of my favorite TV shows there), and thought - why not??

So off to Toronto we went! 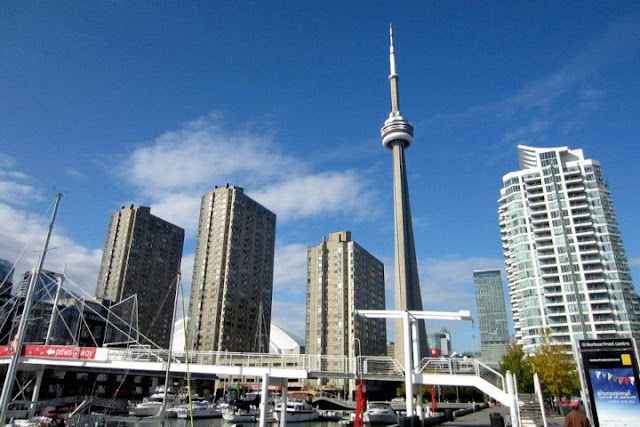 View of the city skyline from the waterfront.

We were there for four nights, but she had to work for a bunch of the time we were there, so I spent some time wandering around downtown Toronto on my own.

We arrived on a Wednesday night, and the first thing we did when we got to town was look for food. It was late, so we were worried that nothing would be open (in Europe nothing was open late!), but our fears were quickly quelled. There were tons of bars and restaurants still open!

We settled on a place called the Loose Moose, because their name was so awesome, and we were not disappointed! We ordered a sandwich and poutine and beer, and it was a great start to our trip. We ended up going back to the Loose Moose two more nights - they had cheap beer, a cool environment, and friendly staff.

Thursday we ventured out for breakfast, then M went to work. I wandered around a bit, then took a long walk to the mall downtown. A co-worker had told me about a store called Jacob that I had to check out, and it was indeed pretty great! They were having a sale, so I shopped a bit, ate lunch, and then headed back to the hotel. After a nap and a shower, M was off work, so we cabbed it back up to the mall for dinner and cocktails.

Friday M started work really early, so I slept in a bit and went to the art fair (Art Toronto) that was next door to our hotel. Then I walked down to the waterfront, and, since I wasn't sure if M would have time the next day, went to the top of the CN Tower. It was so awesome! I went all the way to the top, facing some of my fear of heights, and the view was so worth it. 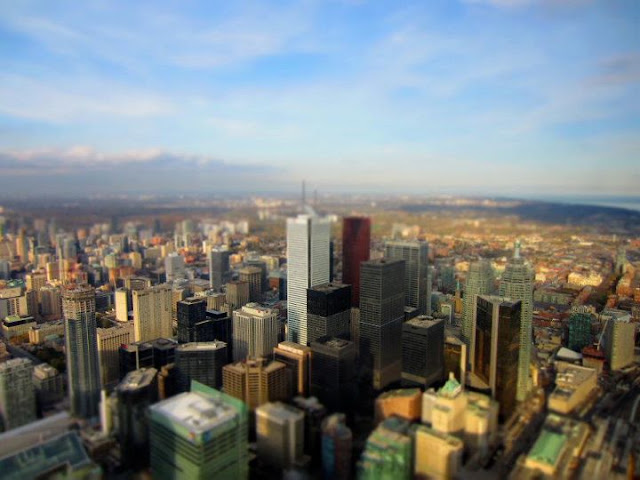 View from the observation deck of the CN Tower, photo taken with my camera on "toy camera" setting. 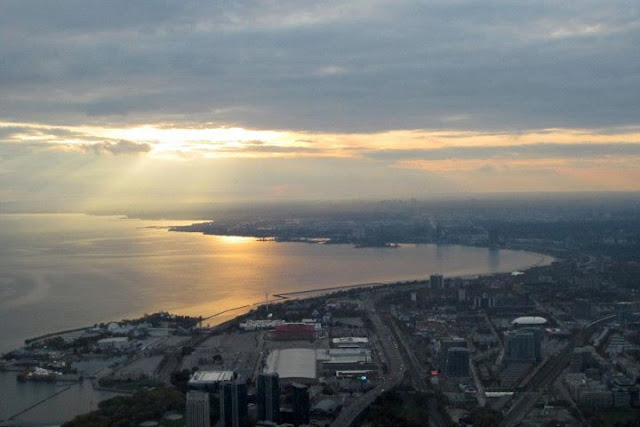 The sunset from the top deck of the tower! We were crazy high, but the view was so awesome! 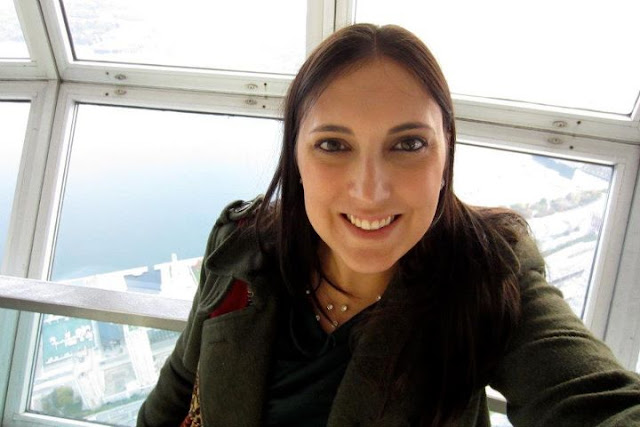 So excited to be so high up!

By the time I got back down, M was wrapping up work but it was super late, so we grabbed a bite to eat at the Loose Moose and went to bed.

Saturday morning, M didn't have to be at work until 11am, so we got up at the crack of dawn (or, 7am) and headed over to the Distillery District. 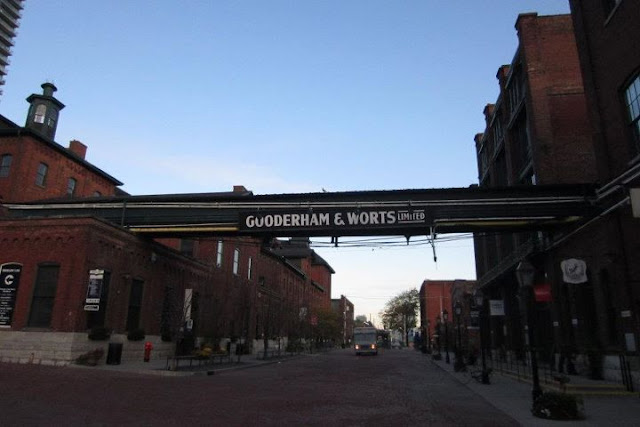 The Distillery district, at about 7:30am. We were so far North it didn't get fully light until after 8am.

Not much was open, unfortunately, except for Balzac's Coffee Roasters. It was one of the coolest coffee houses I've been to, and had this great loft area with really good local photography on the walls that just screamed to hang out in. We had a delicious breakfast, then walked around some more. 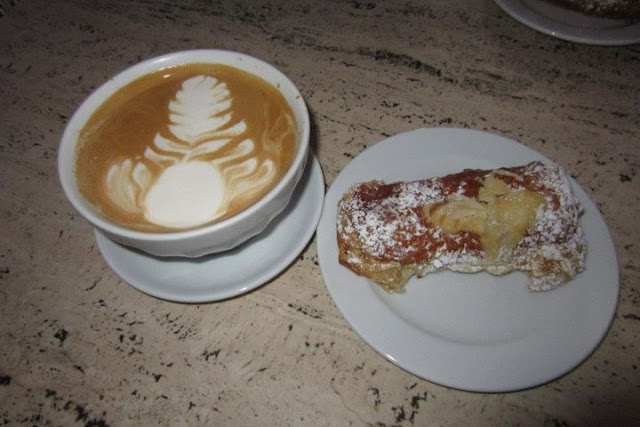 A "Canadian" latte (with maple syrup - so good) and a chocolate almond croissant from Balzac's Coffee Roasters!

Then we figured we had just enough time for M to see the top of the CN Tower, so we cabbed it back to the tower and up we went again! 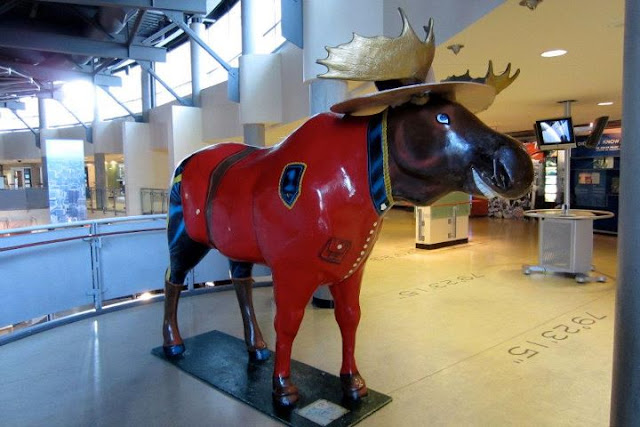 That's Officer Moose to you.

After M went to work, I took a walk back down to the farmer's market we had passed in our cab ride back to the tower. I wandered around and sampled some delicious tasty treats, then walked back to the hotel. I did a quick workout in the gym, took another nap (can you tell I really needed a vacation??), and then when M got off work we went back to the Distillery District for more exploring and dinner.

There was a Maple Leafs game that night, so we joined in with the locals in rooting them on - we were hoping to go to the game, but even the cheap seats were super expensive! We were thinking of going late and trying to get discounted scalped tickets, but the timing just didn't work out. I hope next time we go we'll get to take in a game - they're really into their hockey up there! After dinner, it was too cold to walk around much, so we took a cab back to the Loose Moose for a last drink.

Sunday was super low key because it was just sleeping in a bit, then getting to the airport and flying home. The Toronto airport is super easy to get around, though it's quite big. Customs takes a while, so make sure you get there with plenty of time, but the airport is nice and clean!

Oh, quick rant, though - Air Canada kind of threw us through a loop on the way back - on the way there, our ticket included a checked back. On the way back, the policy had changed, so we had to pay $25 for our checked bag! Boo! I really think that sucks - it should be from the date you buy the ticket, not from the date you fly. There's nothing worse than showing up at the airport for a flight and having to pay money you weren't expecting at the end of your trip. Shame on you, new "alliance" that Air Canada is part of.

Toronto was awesome, all in all. The weather was surprisingly nice for late October, and I would really like to spend more time there. Next time, I'll rent a car and we'll try to get to Niagra Falls! I'm super bummed we didn't get to last time.

Anyone know of anything in Toronto I shouldn't miss on my next trip?
Posted by addy at 9:40 AM

Labels: canada, places I've been, things to do, travel photos, where to drink, wish I was there

Toronto was amazing!! and trips are always better with friend. So glad that came with me. :)