A weekend wedding in Las Vegas

It was a quick, but memorable, trip - BF had never been, and it had been over 7 years for me. Neither of us are huge fans of the desert. We don't really gamble, we don't drink all that much, and neither of us are keen on crowds. But SdlTC (gosh, even her initials are a mouthful!) was getting married there, so there we would be! 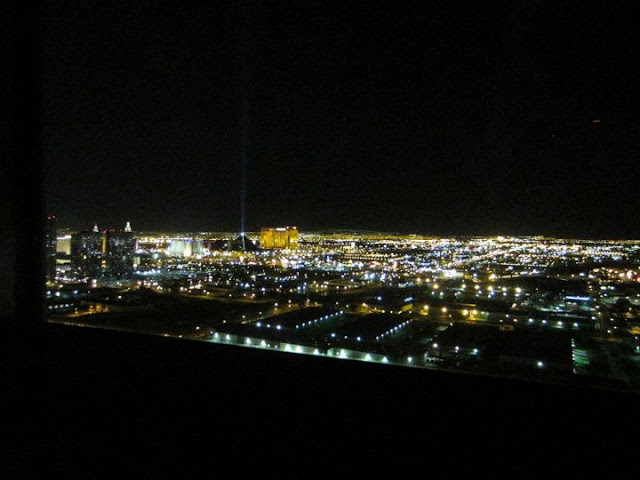 Awesome view of the strip from a club at the Palms!

In the end, the wedding and surrounding events were awesome and fantastic, but our stay in Vegas wasn't all it was cracked up to be.


The trip started out mellow enough - when I had asked BF how he wanted to get there - car or plane - he'd said plane. So I booked flights to Vegas from LA on Delta, and then home on Spirit. (Yes, this is THAT trip, the one where Spirit Airlines screwed us over and left us stranded, securing my everlasting hatred.)

Anyway - the flight to Vegas was uneventful and quick, though the plane was so small that BF had to duck while we boarded and found our seats. We arrived in Vegas, played a quick round of slots just because they were in the airport, then cabbed it over to our hotel, the Platinum Hotel & Spa. (I originally wanted to stay somewhere on the strip so that BF could get a true Vegas experience, but SdlTC got a GREAT deal on a block of rooms!)

Again, things started out well - we got a free upgrade to a suite that was larger than our apartment, and we were actually bummed that we wouldn't be spending more time in the room. It had a full kitchen (including a dishwasher!), a nice living space, a huge bedroom, and a spacious bathroom with a shower and a jacuzzi tub.

The rehearsal dinner, girls' night out, and wedding were all incredibly fun and awesome. We had such a nice time seeing SdlTC and her fiance, Ricky Bobby, walk down the aisle, and hanging out with all their family and friends! I got to wear a gorgeous bridesmaid dress, and SdlTC was a stunning bride! 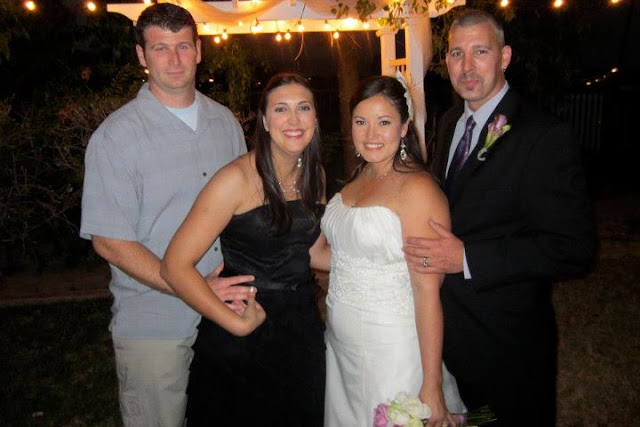 BF, me, SdlTC, and Ricky Bobby! What an awesome wedding!

But the rest of the trip was not so awesome. Once the wedding was over, it was like all of the magic was sucked out of the trip.

After the wedding was over, we took a cab back to the hotel and then decided to take a walk down the strip. We found a place to eat that was underwhelming - isn't Vegas known for its food??? - because we didn't know where to go and the buffet I had wanted to try was closed. Then we went to the Paris Hotel and gambled for a while, which was fun because I won about $10!

When we got back to the hotel, I decided I wanted to take advantage of the hotel's giant jacuzzi tub. What a terrible idea that ended up being. I started to fill the tub, and after about 5 minutes, it was about 1/2 way up to the spa jets. I knew that I needed to wait till the water was higher than the jets to turn them on, so I left them off as I started to soak. When the water finally was higher than the jets, I turned them on, and got the worst surprise ever. With the jets came disgusting black specks! I was instantly covered with them and screaming. Two showers later I was storming down to the lobby, but unfortunately for me, there was no manager on duty. They offered to change our room, but by that point, we only had about 8 hours left to sleep and our stuff was all over the damn place, so I said no.

By the time we went to check out the next morning, the whole Spirit Airline fiasco had happened, and I just wanted to get the hell out of Vegas. I bitched to the manager a little, but didn't push the issue as much as I could have. They comped us the drinks we'd had at the hotel our first night, but "couldn't comp the room because it was booked under the special block." Whatever that means. 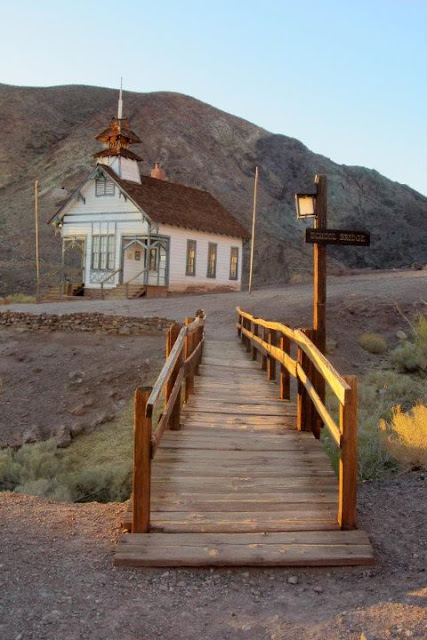 We stopped in old town Calico to stretch our legs and it was pretty cool!

All in all, we had an good weekend because of SdlTC's wedding, but we won't be going back to Vegas any time soon!
Posted by addy at 9:39 AM