One of the best things we did while on the East Coast in October was extend our stay in Philadelphia in order to check out the best places for Philly Cheese Steaks. A college friend who has relocated to Philly took us around to the two most famous places, along with HIS favorite place. KK and I split a cheese steak at each location, and at the end decided which one was our favorite based on overall taste, meat, bread, and location.

The three places we visited were: Pat's, Geno's, and Jim's. (Apparently, in order to have a good Philly cheese steak place in Philly, your restaurant has to be named after a person.)

PAT'S
Pat's was first on the list. The first thing we had to learn was how to properly order a Philly Cheese Steak. Fortunately, we had this handy dandy "how to!" 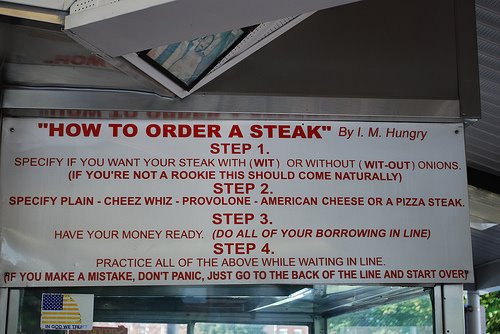 Planning a trip with a group can be tough. There are so many things to consider - people's tastes, what people want to do and see, where to stay, where to eat. It's exponentially easier when you have a group of friends like mine - we're all pretty flexible, and we're not against the idea of "subgroups" going and doing their own thing for a while. We're low key people, and I have a feeling it's going to make planning our trip to Italy next year for our friends' wedding a fun process rather than a tedious one.

The one thing to keep in mind is the constant changing of plans - take, for example, the itinerary. Granted, the itinerary I posted for the trip was SUPER rough, but it's only three days later and things are already changing. When I did that itinerary, I was thinking that the majority of people would want to do their own thing after being in Florence. I knew one friend wanted to visit the people she worked for in the Alps, and thought it might be fun to detour there. But I forgot that about half the people going have never been to Italy, and that for them, Venice might be more important than the Alps. So I took the two days assigned to the Alps, and put them in Florence and in Venice instead. That way, my one friend can still go visit her people, but others have more opportunity to explore the areas they're interested in. I also made a split on one day - some people want to stay in Rome a day longer while some want to go up to Siena with the bride and groom.

So I just found out that one of my bestest friends in the world is going to get married next year in Siena, Italy! I am SO stoked, and less than 24 hours after finding out, I'm already planning my itinerary.

Wanna see what I'm thinking? I thought you might!

The wedding is in late June, on a Monday. The bride and groom are planning on going to Rome for a few days before the wedding, and having people who want to meet up there so that we can all caravan to Siena. So this itinerary is based on that - and the fact that BF and I want to make a great trip of this and go for a solid 2 - 2.5 weeks.

Flying out on a Wednesday night, and arriving in Rome on a Thursday. We're thinking of flying into Rome and flying out of Vienna.