A few weekends ago, BF and I were bumming around the house and randomly decided to drive up to Sequoia & Kings Canyon National Parks.

I know, so spontaneous! 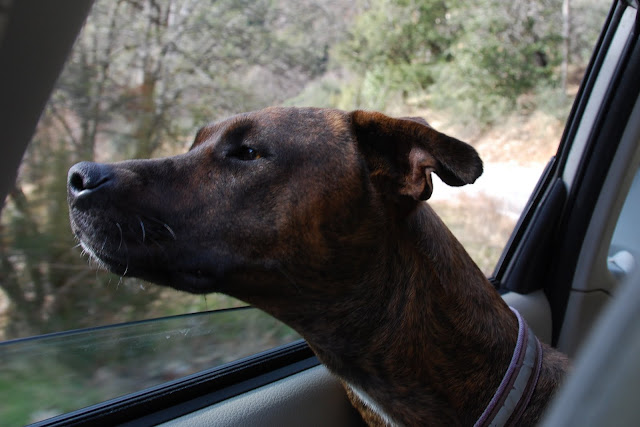 It was already 4:30pm on a Saturday, so we hurriedly packed overnight bags, grabbed Emma's bed, and got on the road. We were on the road by 5pm, and on the way up we found & booked a dog friendly motel by the entrance of Sequoia National Park (Buckeye Tree Lodge Trip Advisor review) - and we had such a nice stay!

The conversation with the woman on the phone was rather hilarious.

Woman: So when will you be arriving?
Me: We're driving up from Los Angeles now, so it'll probably be between 9pm and 10pm.
Woman: Ok, well reception closes at 9pm, so I'll go ahead and leave your key on the cork board. And the owners live right on the property, so if a bear gets your key or something, just ring the bell.
Me: I'm sorry, what? "If a bear gets our key?"

Anyway, we had an very chill drive, ate dinner at a truck stop right after the Grapevine, arrived at the hotel around 10pm, and retrieved the key, bear free. It took Emma a while to settle down in the room - it usually does in a new place - but we passed out right away.

The next morning, we went outside to the amazing views of the river RIGHT behind our room. I want to go back to this place and stay there again, because there was so much to discover/explore, and the area behind the hotel was so peaceful! Each room had a patio that begged to be used for a leisurely cup of tea. 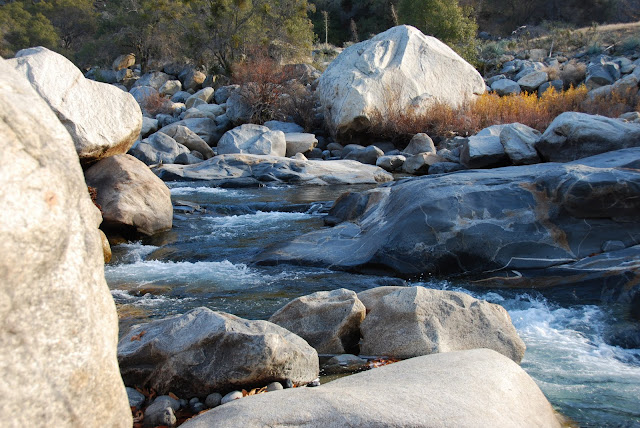 The river was steps away from the hotel and had tons of rocks to climb around on. 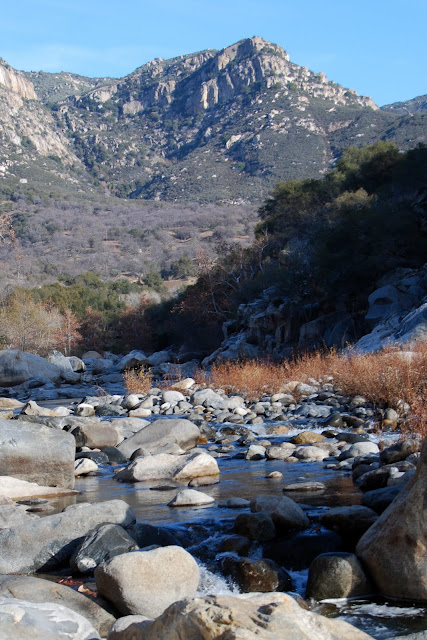 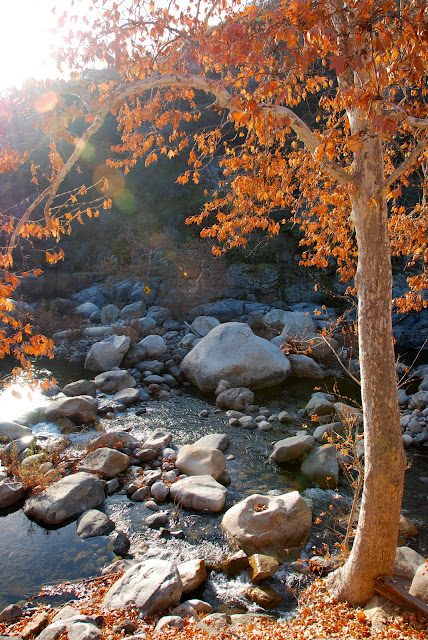 We checked out early, eager to get into the park and see some giant trees. Entrance to the parks is $20/car, but you can get a year long pass for $30. We definitely want to come back up again in the spring, so we got the yearly pass. It's good through the end of January 2013, and I'm so excited to use it again!

Right off the bat, we saw wildlife - mule deer to be specific. 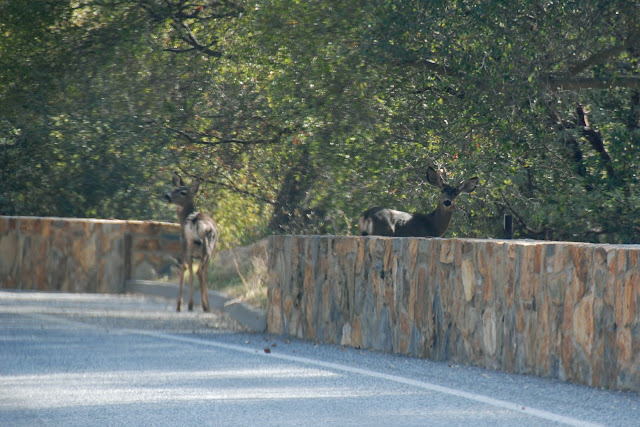 The road took us up from around 2,000 feet to about 7,000 feet! Emma enjoyed the fresh mountain air.


Our first stop was General Sherman - the world's largest tree by volume. We saw some melted "snice" (snow/ice), and Emma had her first encounter with the cold stuff. 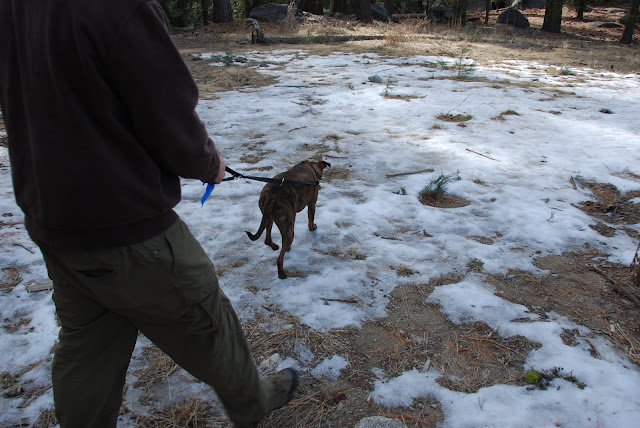 She was pretty indifferent to it, actually. 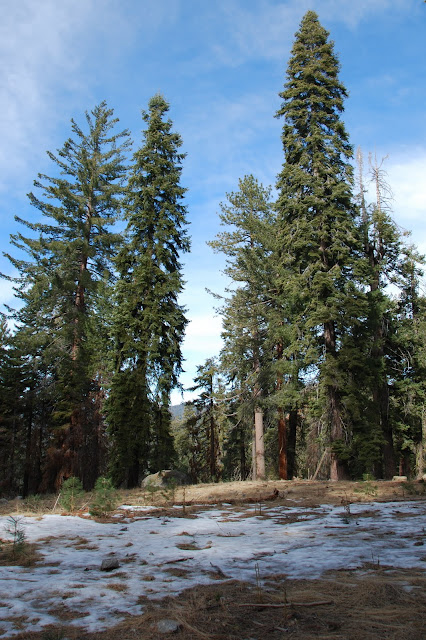 The hike to General Sherman was quick on the way down - maybe 10 minutes... 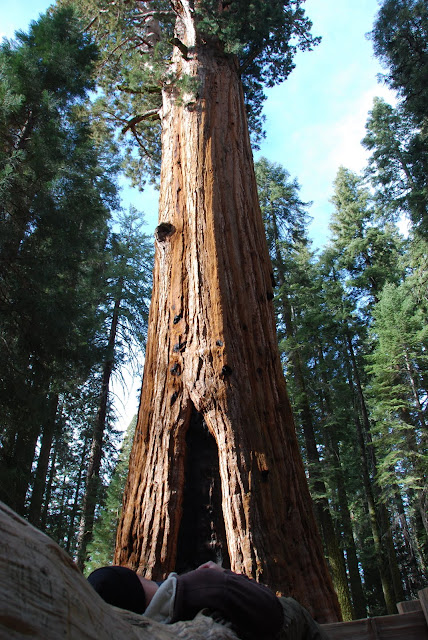 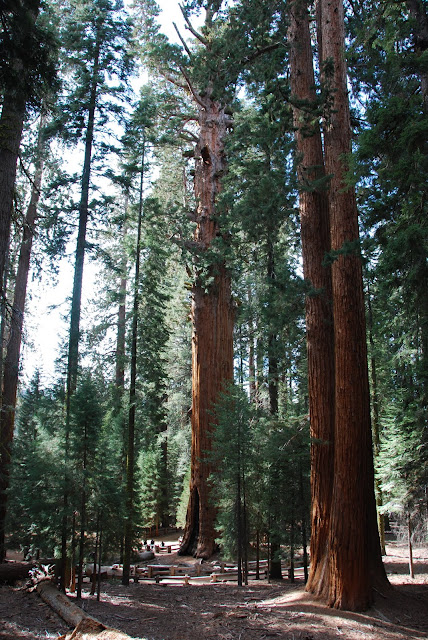 The hike down to the General Sherman tree.

But going back up kicked my ass - the air is thinner at 7,000 feet elevation, and I was SO out of breath! (It was kind of embarrassing, actually!)

We got back into the car and headed towards Grant Grove, where the General Grant tree - the second largest - is. 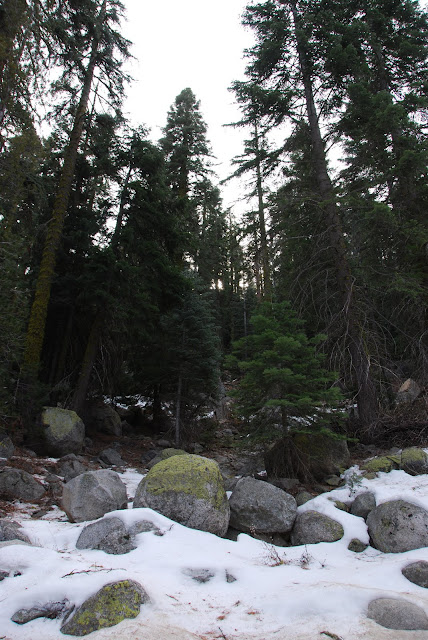 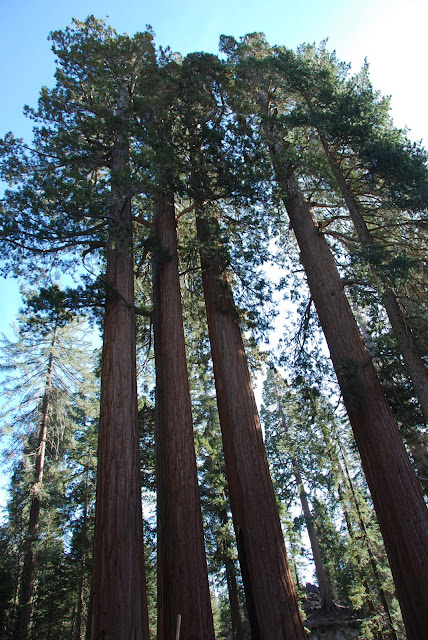 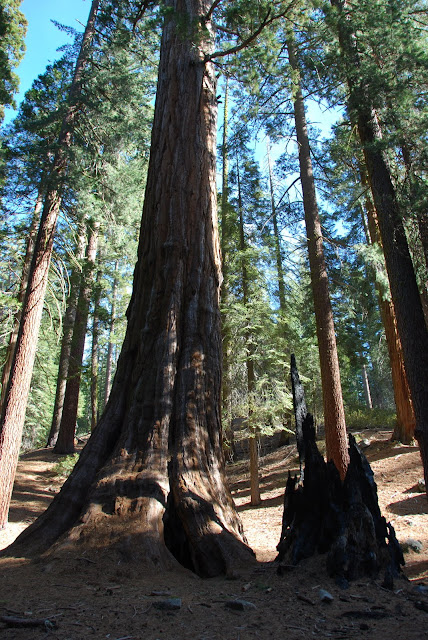 I didn't upload any photos of General Grant, because where it's located, it's tough to get a good shot of it. The "hike" up to it is only about 0.5 miles, and really easy. It's a great big tree - but you can't get close to it anymore because the ground around it is too delicate (or something). So we took a little trail off of the main trail and checked out some almost as large trees up the hill from General Grant. 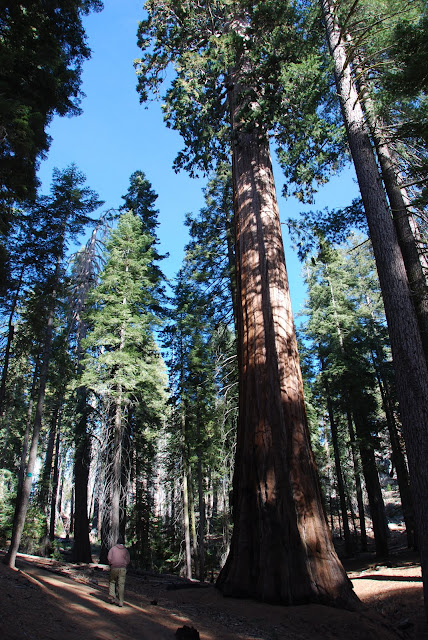 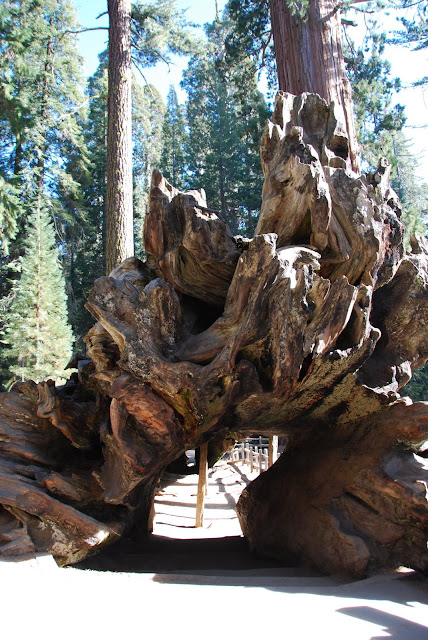 A fallen sequoia tree - you can walk all the way through it!

Unfortunately, after Grant Grove, we had to head back home since I had to work the next day. We're eager to go back though, because while dogs aren't allowed on the trails in the national parks, they are allowed on those in the national FORESTS - and about 30 minutes north of General Grant, there's supposed to be a very cool meadow of tree stumps that were cut down for logging where dogs are allowed.

Maybe we'll go in the spring, so there will be the potential for lots of flowers! 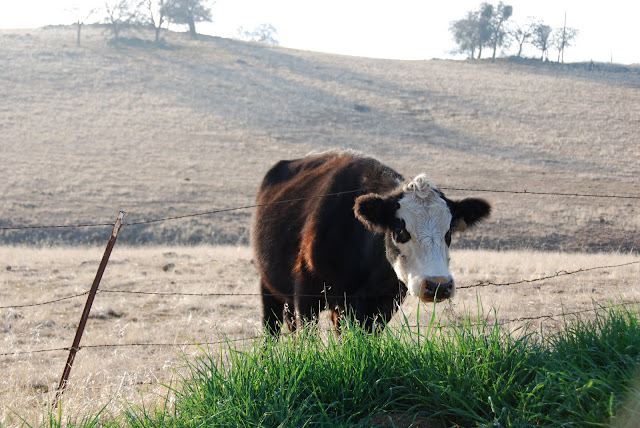 We saw this brown cow on the way home and he cracked me up - he did not care that the barbed wire was in his way of the delicious grass!

Overall - Sequoia and Kings Canyon National Parks were very cool - I can't wait to go back! And at only about a 3.5-4 hour drive from LA, they're really reasonable for a quick weekend getaway.
Posted by addy at 12:27 PM