After a hot and crowded Rome, the breezy Tuscan countryside was just perfect. The weather was still HOT but there was much less humidity, making it a pleasant change!

We arrived in Siena in the early evening, and took a cab from the train station to our hotel. The train station in Siena is at the bottom of the hill the city is situated on, so cabs are a good way to get to the main areas. 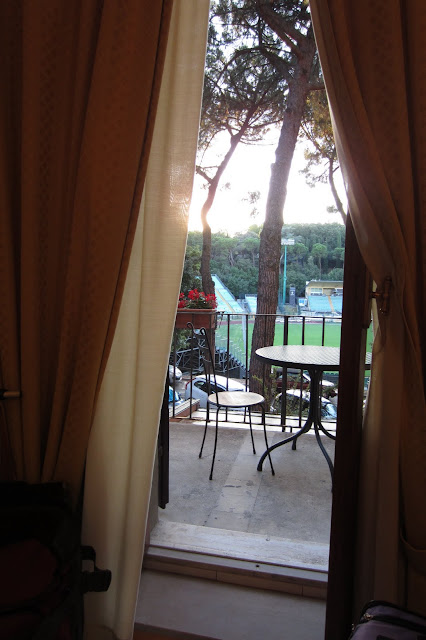 After checking into our hotel (which felt like a four star resort after the hotel we had stayed at in Rome), we walked down the main strip in Siena to Il Campo. Il Campo is the main square in Siena, and it was already set up for the Palio di Siena, which was very cool to see! And fortunately, we were there about a week and a half before the actual event, so we avoided the massive number of people who come to Siena for the Palio! 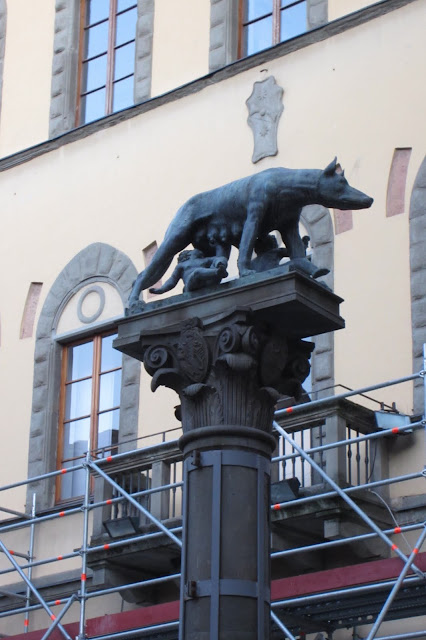 Siena was founded by the son of Remus, so there are statues of Romulus and Remus all over the place! 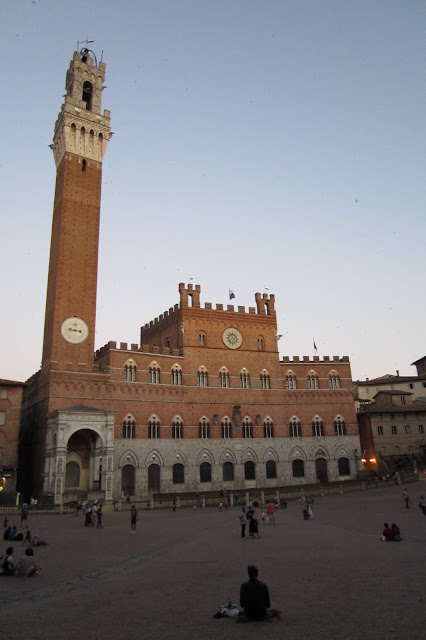 We had dinner at a really lovely place that overlooked Il Campo, and went all out with prosciutto and melon, carpaccio, and pizza, and even splurged on a liter of table wine, which was really delicious!

The following morning we checked out of our hotel and went off to find the villas where we'd be staying and where the wedding would be taking place. We stayed at the Fattoria di Corsano, which was directly adjacent to the Tenuta di Corsano, and I really can't say enough about these two places.

Tenuta is owned by a family that lives on land that produces wine and olive oil. Fattoria is owned by Tenuta's family members, and is on the same plot of land. Both villas have numerous apartments with various combinations of sleeping arrangements, and both families are so sweet and hospitable. It took a bit of effort to figure out which building was ours (the owners also have a farmhouse property, and their son was asleep when we arrived), but everything was sorted out fairly quickly.

While we were waiting, we were taken in as honorary guests of Tenuta. SAY met us by their gorgeous infinity pool, and the owners gave us the rundown of the property and surrounding area. 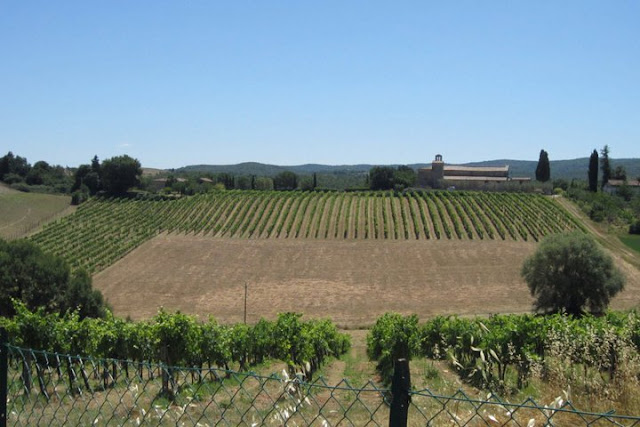 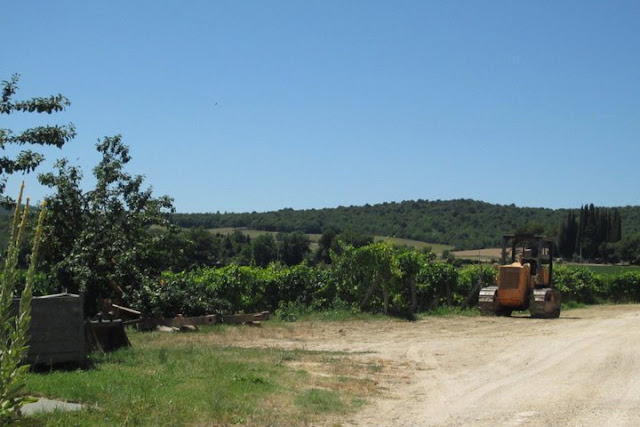 Farm equipment, because it really was a working vineyard and olive grove! 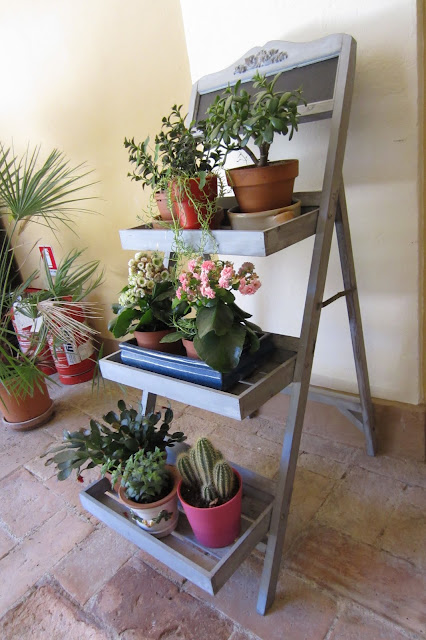 The owner of our villa was really into gardening, and the courtyard was just filled with beautiful pots of plants!

After a few hours of settling in and relaxing at the villa (and a quick dip in the awesome pool), we all headed back into Siena for a tour and the rehearsal dinner. Since we'd already wandered around Siena, we took the time to explore a bit more and then found an Internet cafe so we could all catch up on "the real world." 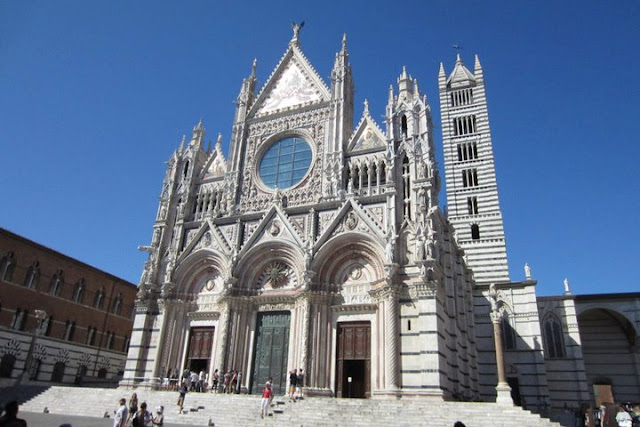 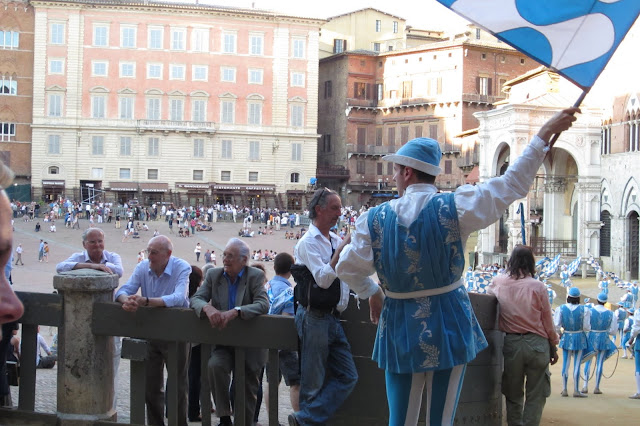 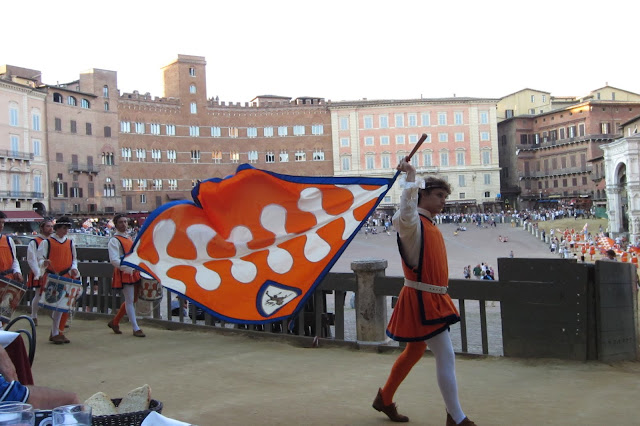 Travel tip: The restaurants in Il Campo might be a tiny bit more expensive, but the atmosphere of sitting right in the square is worth the price! 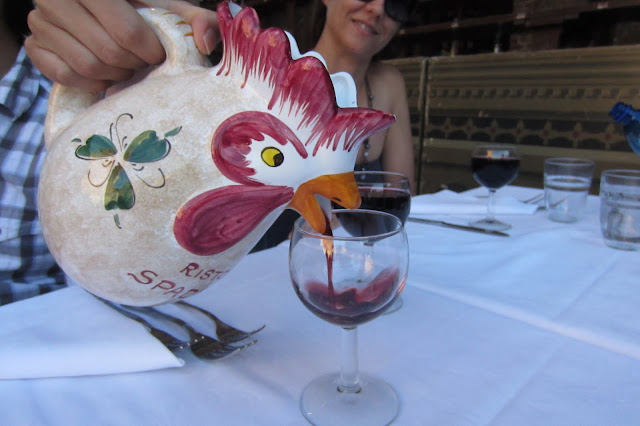 Chianti being served from a rooster! 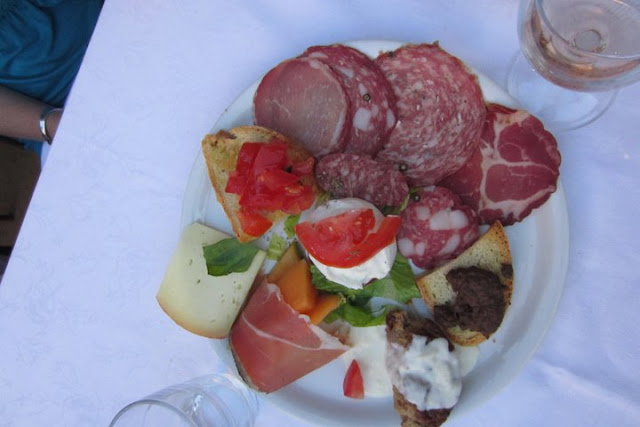 Our appetizer plate - it was amazing. Little bits of different starters!

After dinner we headed back to the villa, where we were treated to the celebration of the church's 1,000th birthday! There were fireworks, and we lounged around the pool in the warm night watching fireflies and drinking wine while we waited for them.

The experience at the villa was truly magical, and that was before the wedding even started! I have daydreams about going back to the villa and spending a week of uninterrupted relaxation time there. It was the perfect Tuscan setting! 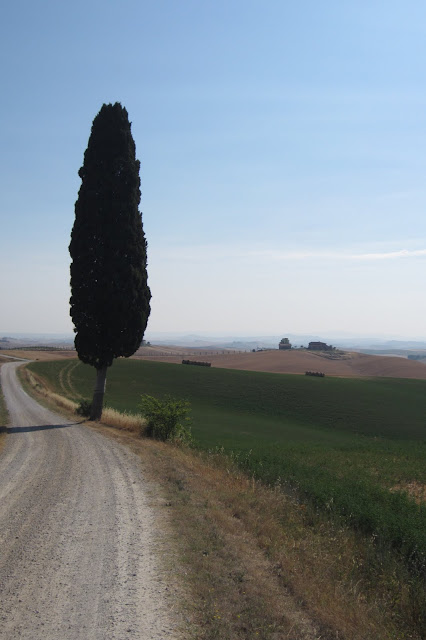 About a three minute walk from the villa is this famous cypress tree. The wedding photographer claimed it was the most photographed/painted cypress in the world! (Or at least Italy!) And for the rest of the trip, we did notice it in many paintings and photographs!

Up next: A fairy tale Tuscan wedding!
Posted by addy at 10:05 AM

Labels: europe, italy, places I've been, siena, travel photos, travel tips, where to stay, wish I was there