This blog is entirely about one of my favorite places in Tuscany: a small, off the beaten path town called San Gimignano. It's a pretty popular tourist town, but people traveling on their own (without a tour or a rental car) don't go as often because it's not as easily accessible as other Tuscan towns. 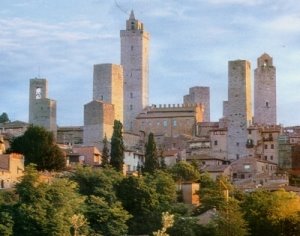 
There are many people who look at what it takes to get there (two buses) and decide to skip it. This is a huge mistake because San Gimignano is quaint, gorgeous, and gives you one of the best views of Tuscany has to offer. It's famous for its architecture, especially its many towers and narrow, winding streets.

HISTORY
San Gimignano was originally an important trade location, as well as an important defensive location, as it was atop a large hill and the towers provided long views of every direction. 72 towers once stood, but there are now only 14 towers remaining, including Torre Grossa.

DON'T MISS
Torre Grossa! For a small fee, you can climb up the many stairs to the top of Torre Grossa. The view alone is worth four times the cost of entrance. There is also a very nice path to walk on the outside of the city walls, and the main street has tons of shops and places to eat.

TIME REQUIRED
Touring San Gimignano can easily be done in a few hours, making it a fantastic day trip from Florence. It can also be stretched out, since there are places to explore and museums to peruse if your heart desires.

GETTING THERE
Bus from Florence to Poggibonsi. Then, bus from Poggibonsi to San Gimignano. The buses are direct, and you literally just have to cross the street in Poggibonsi. I've done the trip by bus twice, and it takes about an hour. **TIP: Don't be intimidated by having to take a bus or having to switch buses. I was definitely apprehensive at first - I usually prefer going places that are very easily accessible and there is little chance of me ending up in the complete opposite direction as I was supposed to. But it was really a very easy process! Even if you're not an adventurous traveller (I am usually not either), this will be managable for you!**

THE EXPERIENCE
The first time I went to San Gimignano was in June 2003, with my college. They had gone to Siena first, but since I'd already been and wanted more time in Florence, I met them in San Gimignano. Since I didn't have a cell phone with me, I arrived a full hour before they did, and used that time to enjoy the feel of the center piazza. I had a caffe latte and a pastry at a little place across the piazza from the Duomo, then sat on the Duomo steps with a book. There was a harpist playing in the piazza, and people were bustling around everywhere. It was one of the most relaxing and genuine moments I'd had in Italy, and I'll never forget the charm and romance of the town. Once the group arrived, we went to the top of the tower, where it was windy and cool and gorgeous. 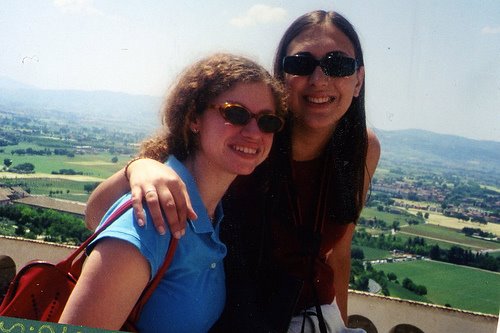 A friend and me at the top of Torre Grossa - gotta love that Tuscan countryside!

I took my family back when we returned in August 2004. It was still just as special. We wandered around, getting lost on streets but easily finding our way back to the main piazza thanks to the tall towers. We bought snacks and walked around the city wall, enjoying the views. 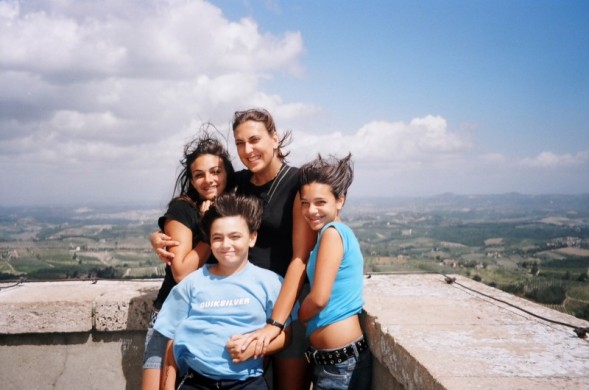 Once again at the top of Torre Grossa - it was REALLY windy that day, but again you can get an idea of the incredible view.

Since both of my experiences with San Gimignano were so fantastic, I seriously urge anyone who is spending time in the region to find a morning or afternoon to visit. It might be a little difficult to get to, but it's so worth it!
Posted by addy at 10:46 AM

Labels: europe, favorites, how to get there, italy, places I've been, san gimignano, travel photos, travel tips, wish I was there