Ireland: Driving on the left.

Once we got to Galway, we rented a car. The functionality of it was fairly perfect - you get off the train in Galway, leave the train station, turn left, walk half a block to the main square, cross one street, and you're at the Budget Rental Car office. Easy peasy, even in a light rain. 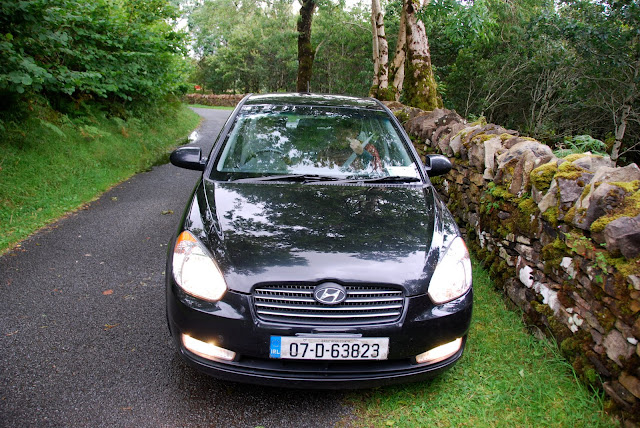 Our little car, on a "two way" road by Lough Eske in Co. Donegal.


Once there, however, they really get you. Extra $ for a "premiere" pick up location, extra $ for taxes, extra $ for BF to be a driver too, etc, etc. When I booked our car online, it quoted me $250 for Friday afternoon through Sunday afternoon for an automatic car and a GPS system. I considered bringing my GPS, and getting the Garmin update for Western Europe ($99), but figured the $45 they were charging would do us just fine. Problem was? After all was said and done, the rental car cost us $450! $40 of that was them charging ahead of time for a full tank of gas, which we had refunded when we brought the car back with 3/4 of a tank, but oh wow did the extra fees sucker punch me. Next time, I'll do my best to pick up the car from an airport, preferably in Dublin where there are numerous companies and some actual competitive prices.

We finally got done with the paperwork, etc, we had to trek to the parking garage. They give you the car keys and the GPS and send you merrily on your way with a map to the parking garage and not a whole lot else. You go to the garage, talk to the guy to get a ticket so you can get out, and then take a rickety elevator up to the third floor and hunt for your car with the description and license plate number they give you. Yeah, it was an adventure. We finally found the car, loaded up, and started on our way.

The first 10 minutes in the car were the only time the whole trip that we fought.

The hardest part for me was getting my bearings and my spacial awareness down. It's very strange to have more car to your left! I almost sideswiped several cars, especially when the road we were on took us through the incredibly busy and quick moving Eyre Square. BF says I bumped into some guy's sleeve, but I'm not so sure. It was incredibly stressful, however, until we got the GPS working and had a destination in mind so that I could fully concentrate on the driving part. I'll admit that there was a moment there where I just wanted to stop, cry, and let BF take over. But I did it, and I'm so happy that I did! Once I got a hang of it, it was a breeze! And fun, too - such a different experience.

The car was totally worth it, as we were able to go all over the place, and to any little nook or road we wanted to. We drove North from Galway, ending up in Ballyshannon for the night, drove farther north the next day, then back to Ballyshannon for another night. In the course of the day and a half of exploring in the car, we drove over 700 km (430 miles) - a lot of driving in approximately 18 hours.

TRAVEL TIP: Irish roads are an adventure. With the exception of a couple highways, we mostly drove on small, country roads. And they were all two lanes, even though it didn't feel like it half the time. When the road isn't wide enough for two cars, and there's another car coming, whoever can pull over first, does. It's a very polite system, and we never had an issue with the roads, except for one by a lake that had some blind curves. We were almost hit head on by a BMW on that one, and he had to back up so that we could pass each other!

By the time we returned the car on Sunday afternoon, I was an old pro. I was finally driving the speed limit, and cranked our Hyundai Accent up to 110 kmph (A risky 68 mph)! I mastered the round-a-bouts, and even backed the car into the parking spot when we returned to the garage. I'm definitely all for renting a car if you want to tour Ireland and get off the beaten path!
Posted by addy at 9:52 AM

Top 3 must see things in Ireland?

1.Cliffs of Moher -. The Cliffs are 214m high and stretch for a distance for 8 kilometres along the Atlantic Ocean

2.Irish National Heritage Park -story of ancient Ireland from Norman conquerors to down to its first inhabitants.

3.Dublin Zoo -Situated in the Phoenix Park this lush green zoological park has lot to see and do with the family.

Apart from that you must visit the beautiful place of Virginia, The Shenandoah Valley where you must see the very marvelous destination to visit Wood Ruff Inns Resorts. The best place to spend your vacations, honey moons and special holidays. It is one of the best tranquil and serene places of North America as well.