Lisbon was both the first and last stop on our tour of Portugal in October 2015. (Itinerary HERE!)

We didn't spend a ton of time in Lisbon, as we wanted to check out as much of the country as possible... so we had a half day in Lisbon the day we landed, and another half day when we returned from Porto. We will definitely return to Lisbon to check out more of the city, as what we did see of the city was fantastic.

Panorama of Lisbon from one of the many view points.


After checking into our hotel, we took the metro to the Restauradores Plaza stop, and wandered until we found a place to grab a snack. Then we decided to try walking to Belem Tower, but after walking for about 35 minutes or so along the river, we jumped on the cable car that runs to Belem instead. Turns out, Belem Tower is about 8km (5 miles) outside of central Lisbon - so the cable car is a great way to go. 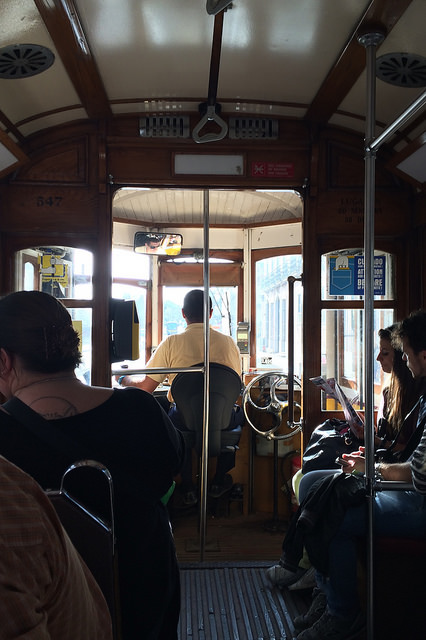 The cable cars were fun and easy to use!

BELEM
The cable car drops you off a few minutes' walk away from the tower, by the Jerónimos Monastery. You're also right next to the famous Pastéis de Belém bakery - where they sell the incredibly delicious version of the Pastel de Nata - a kind of custard pie. They are purportedly the only ones in the world to use an ancient, secret recipe from the monastery. The lines were still very long when we arrived around 5pm!

From there, we walked across the main highway to a pedestrian path by the river, where we also came across the Padrão dos Descobrimentos, the Monument to the Discoveries. It's a very cool monument showing Portuguese explorers located along the river where some of the famous expedition ships departed. 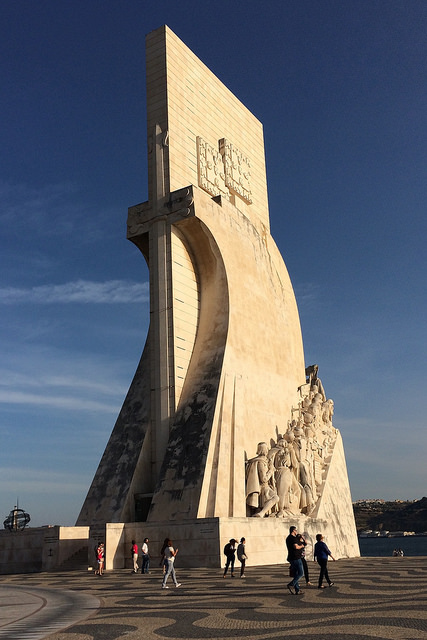 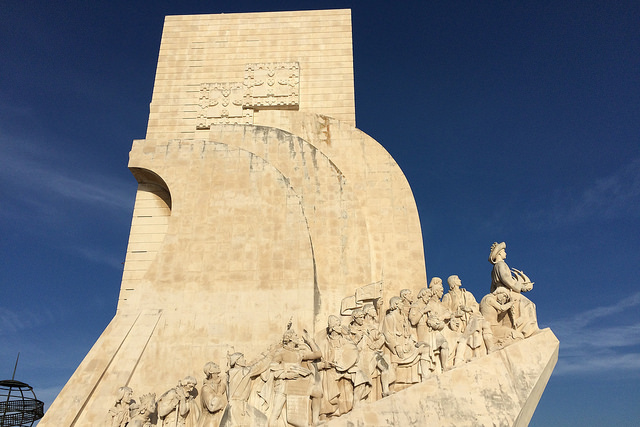 Monument to the Discoveries

Then, a bit further along the river walkway, you get to the Belem Tower. The tower is about a 20-25 minute walk from where the cable car drops you. There's a park that surrounds it, and there are food and drink carts all over the park, including carts that sell wine! We got three glasses of vinho verde to enjoy with the view. 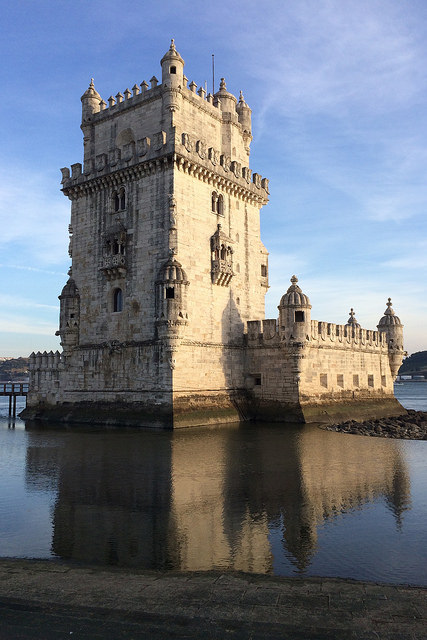 The tower was closed, but it was absolutely gorgeous in the fading light! 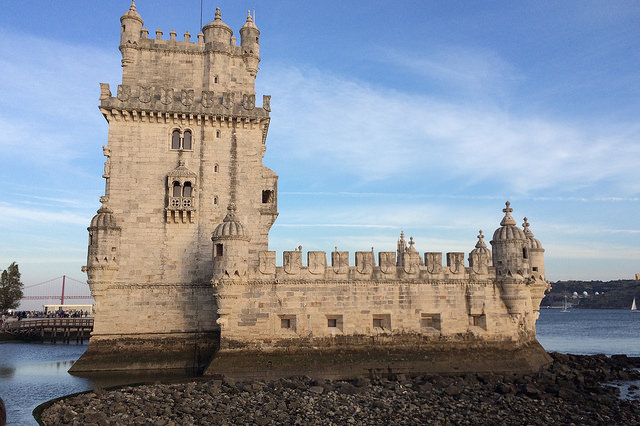 Belem Tower from another the side.

The tower itself was closed when we arrived, but we were still able to enjoy the evening (and our wine) from the park! Hubby and RW got some good catching up "bro" time in, too. 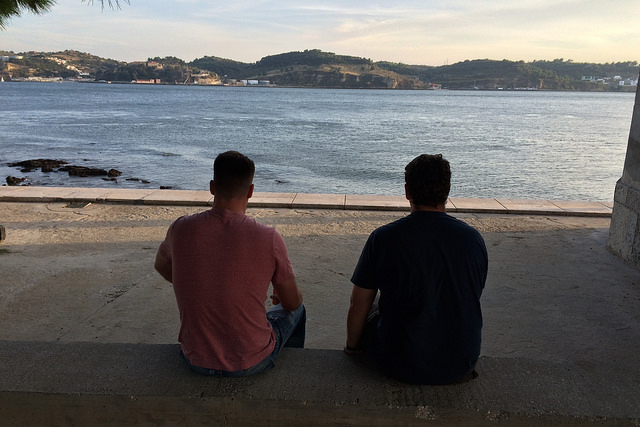 RW and Hubby catching up while I wandered around taking photos.

We took a taxi back to Lisbon with no real destination in mind, and ended up in the Chiado neighborhood. Restaurants and shops were all bustling, and we found an outdoor cafe near the metro stop where we could listen to some street performers while we had a quick snack - beers for the boys and a coffee for me - as we watched the sun set. It was already pretty late by then, so we headed back to our hotel, hung out on the balcony for a while, then went to bed, knowing we wanted to get on the road early the following day.

TRAVEL TIP: The metro in Lisbon is super easy to use, and a really handy way to get around the city. It always felt safe when we took it, and it worked incredibly well to get to and from the airport. Just leave yourself enough time to wait for the trains - the airport trains don't run as frequently.


About a week later, after we had explored some of the rest of the country, we had another almost full day in Lisbon. We left Porto very early on our second to last day, and returned our rental car in Lisbon around 10:30am. After a whole fiasco at the rental car company (more on that soon!), we were fortunately able to check into our hotel early and use our free wifi to find a self service laundromat nearby. We still had a few days in London left in our trip, and Hubby was out of clothes!

TRAVEL TIP: There's a great chain of laundromats in Lisbon called La Wash - several storefronts around the city and it was cheap and very easy to use.  They had easy to understand instructions, though the dryers took about two cycles to fully dry things.

While Hubby was setting up his laundry, I walked across to a cute little market and got us a picnic lunch that was amazing and cheap - cheese, salami, bread, a Coke, a beer, an giant Fuji apple, an a pastry for Hubby only cost 6,19€! Hubby had to get creative with opening the beer without a bottle opener, but where there's a will there's a way, and our picnic ended up being one of our most memorable meals of the trip. 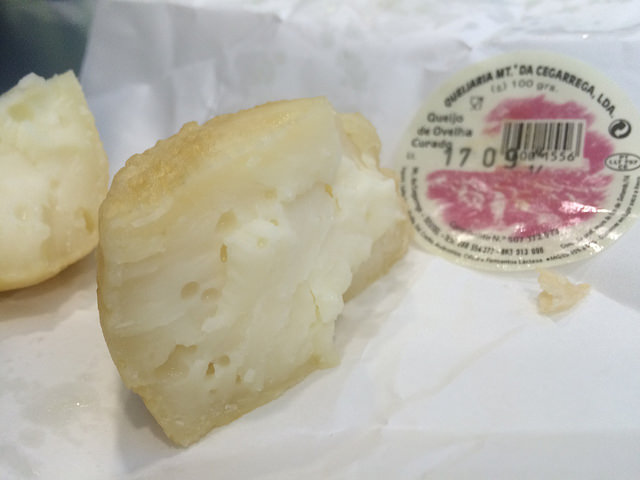 The cheese everywhere in Portugal was so amazing - this one was a bit more firm, but equally as delicious as all the others we sampled! 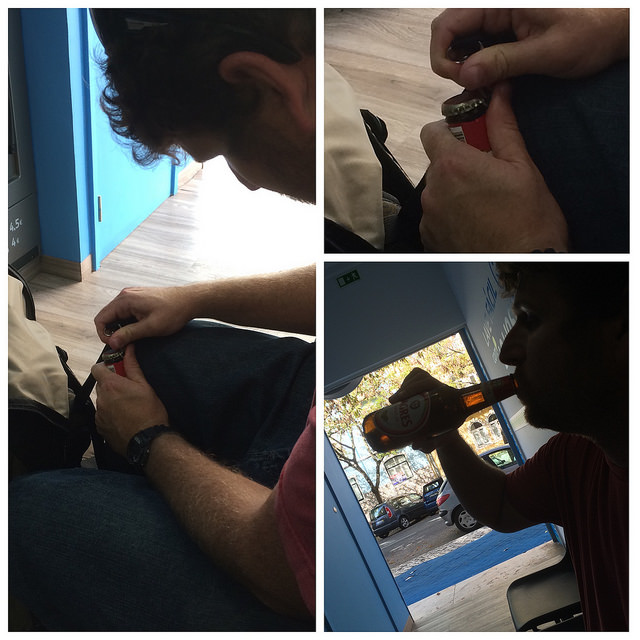 It took a minute but Hubby got the beer open!

After the laundry was done, we wandered around Lisbon some more, and did some souvenir shopping. We love water, so of course, we ended up down by the river and found a little cafe with very overpriced coffees, but amazing views of the water and the setting sun. We did some more shopping and had dinner in the Chiado neighborhood, then it was back to the hotel to pack our goodies for London! 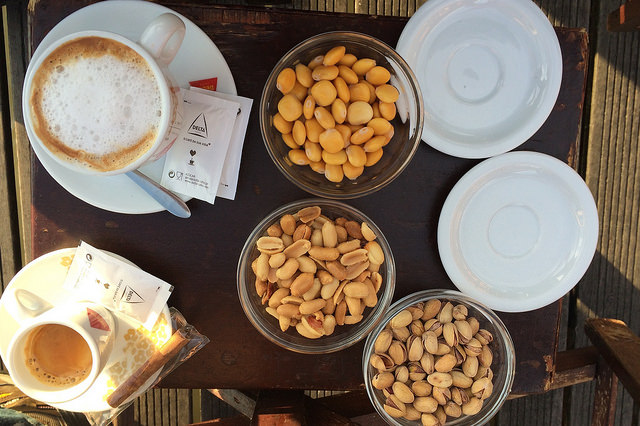 A latte, an espresso, and tremoços (lupini beans), peanuts, and pistachios as a snack! Well worth the additional cost for the snacks and view! 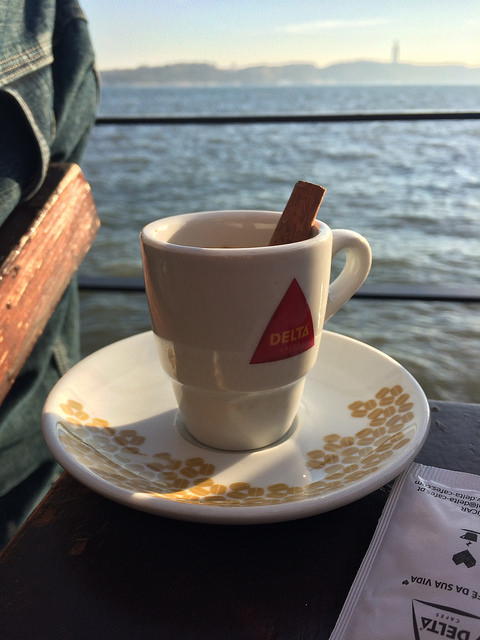 Hubby's espresso was served with a cinnamon stick as a stirrer. Mmm! 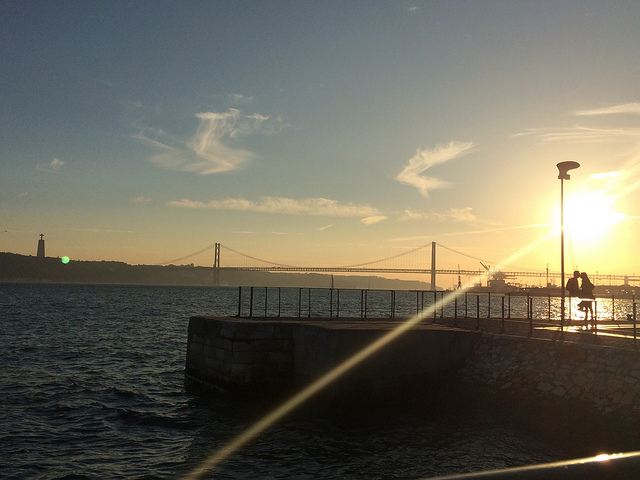 Sunset on the river - the couple on the right were enjoying it, too!

Our time in Lisbon was shorter than we'd have liked, but we very much enjoyed the feel of the city, and we look forward to returning. We loved how easy the metro and cable cars were to use, and how reasonably priced things were. We'll be keeping an eye out for cheap airfare to Lisbon!

More posts about Portugal HERE!
Posted by addy at 3:10 PM