On our trip to Greece, the place that Shorty was the most excited about was Santorini. In fact, the whole trip was based almost entirely around her desire to wake up to the gorgeous Santorini views on her birthday. She spent a massive amount of time researching places to stay. Which town was best? Which side of Fira offered the best views? Was a villa or hotel better? And in her research, she found photos of a villa that she absolutely fell in love with: the Blue Angel Villa in Fira, Santorini.

The view that Shorty fell in love with and weaved many daydreams out of!

Once she had found the Blue Angel Villa, she was intent on making it a reality - which meant finding out if it was reasonable enough for the seven of us to splurge on, as it was clearly much more expensive than many hotels. Here is a review of our booking process, stay, and the bit of drama that has come after our stay. I'm reviewing the booking process and pre-stay process in this post, and then I'll go over our stay and some post-stay drama in my next post.

View of the main area of the villa - it was pretty much exactly like the photo!

BOOKING PROCESS
Since the villa's own website only had dates through 2015 at the time, Shorty started with TripAdvisor. When she submitted the inquiry through them, she received a correspondence back from TravelKeys. TravelKeys is a company that brokers luxury villa rentals & vacation homes. They seem to be somehow affiliated with TripAdvisor, as we reached out to TripAdvisor about the villa, and TravelKeys are who responded.

The woman from TravelKeys who reached out Shorty for the booking process, Mandy (Villa Specialist), was helpful. Shorty and MM went back and forth with Mandy for a while, asking questions and getting guarantees on our stay.

Other than a slight miscommunication re rooms and beds at the villa, the information Mandy provided was clear. Regarding the beds: one email we got implied there were three bedrooms PLUS a loft, while another included the loft as one of the three bedrooms - the latter is true. We were under the impression there were four double beds when really there were three double beds and three couch beds, which unfortunately meant an odd person out got a couch bed each night. Very good to note: this property definitely just has three double beds and three couch beds! 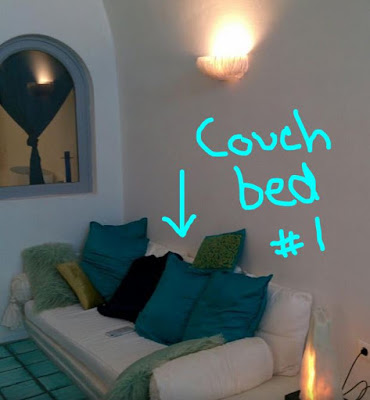 Mandy coordinated with the manager of the property, and they offered to give us a 15% discount if we paid in full (non-refundable, however). We were clearly offered two prices in the emails from Mandy: $901.46/night to have breakfast included, and $874.31/night if it was not, plus the 15% off. 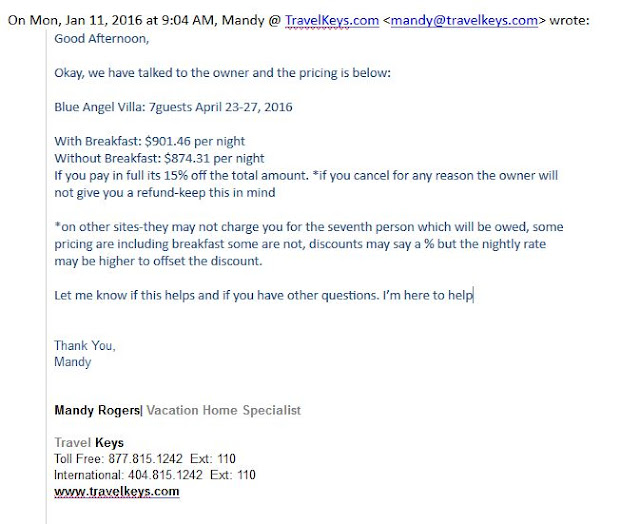 We opted for the breakfast to be included, and to pay in full to get the discount. We later found out that breakfast at the villa should be complimentary - not sure if this was us getting ripped off by TravelKeys, or some huge misunderstanding with the villa's manager. I would hope for the latter, but who really knows.

The payment process was slightly frustrating - TravelKeys first sent Shorty to a link where she was supposed to log in and pay, but the link never worked. Mandy finally sent a more direct link for her to use.

We were disappointed when Shorty went to pay in full with her credit card and was charged another $15/person or so to use the card, but we sucked it up. The total for our four night stay at the villa, with breakfast, ended up being about $3,170. Once we had booked, the agency told us we'd hear from them again about 60 days before our trip to arrange transfers and other bits and pieces.

See, we were a group of 7 traveling, but we were all meeting up in Santorini. SD was landing Saturday around 3pm, hours before the rest of us got in from Athens at 8:30pm, then MM was departing Wednesday around 6:30am, hours before we had to leave for our Mykonos ferry at 10am.

TravelKeys let us know we only had one transfer each way, and then stated that they would pick up SD on the way in, rather than the group of 6 that was arriving later. They did say it was their policy to pick up the first arriving party, so they could hand off keys to them, which we understood. But, we specifically requested that the larger group be transferred rather than SD by herself. SD was fine exploring Santorini on her own and not "checking in" to the villa until the rest of us arrived. Since the six of us would clearly require more than one cab or transport, it made more sense for our group to be picked up. This wasn't agreed to until a fib was given that SD changed her flight to be closer to ours.

In addition, TravelKeys informed Shorty know that a taxi from the airport to the villa should be about €15... it was not. SD was able to book a ride for about €25 during the day, but when we priced it out for our trip, it was quoted at €37 - €43 PER CAR. TravelKeys probably shouldn't be making estimates for their customers if they're that off in price!

The other thing that came up in our pre-stay experience was the "pre-stocking" of the villa. When Shorty got the email from TravelKeys about our upcoming stay, it included a question about what we would need pre-stocked. Now, travelers who are seasoned in staying in villas or private residences might find this to obviously mean that you can pay to have items delivered ahead of time to the villa. However, the way it was presented in the email from TravelKeys made it seem like a complementary service - the villa mentions providing complementary wine and a fruit basket upon arrival, and we were paying extra for the breakfast, so you can see where it might be assumed that this would also be included. I wish they had been more clear from the get go that "pre-stocking" would be an additional charge. 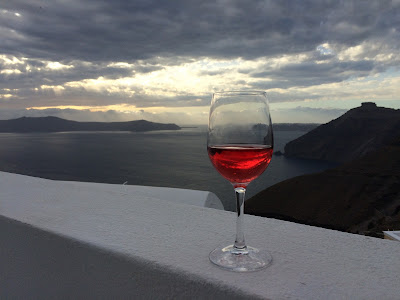 Complementary bottles of wine to drink on the roof!

Anyhow - the pre-stay experience left us a bit hesitant about what was to come, simply because there seemed to be discrepancies in some of the listings for the villa, and that we had a bit of a challenge to get the larger group of us picked up.

Click here for the continuation post that includes our experience AT the villa, and some post-stay drama!