On day 4 of our trip we got a rather late start, as we'd been up late at the Sheridan WYO Rodeo and Street Dance. But we made it onto the road by 1pm, and drove pretty much straight to South Dakota, with a short detour to see Devil's Tower, WY. 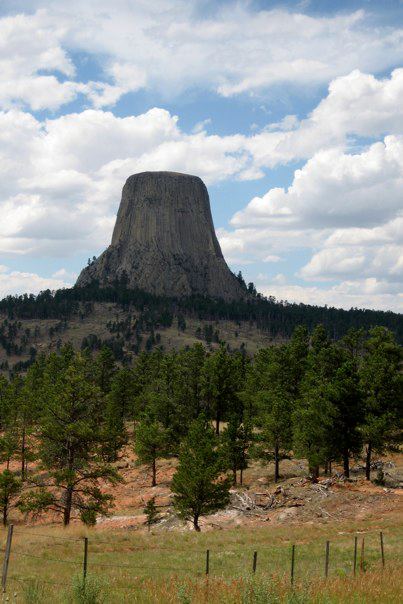 Devil's Tower from the road. 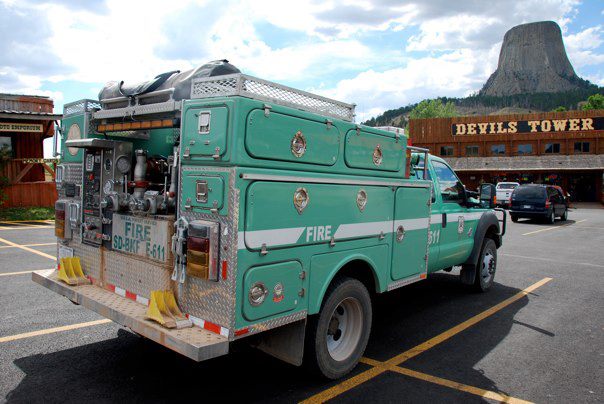 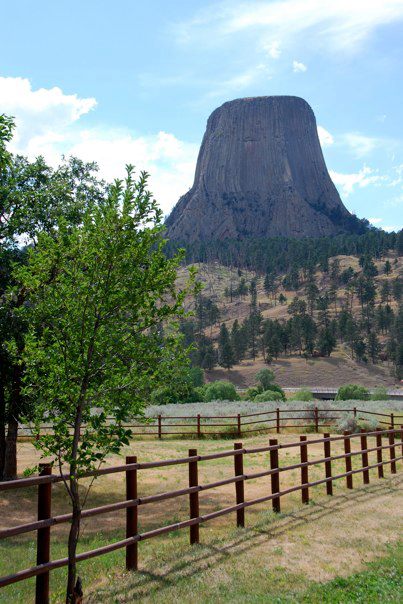 Another view of the tower.

Devil's Tower was pretty neat - and it had one of the most impressive souvenir shops I've ever seen!

The legend behind Devil's Tower is that there were once 7 Native American little girls who were playing when suddenly they were chased by a bear. They climbed onto a three foot high rock and started praying for the rock to save them. The rock started growing towards the sky just as the bear reached them. The ridges on the sides of the tower are from the bear trying to get up onto the rock. The little girls were pushed all the way up into the sky, where they became the constellation Pleiades!

It was a nice little stop and wasn't so far out of the way, and we were glad to have made it.

The route from Devil's Tower, WY to Deadwood, SD, where we were spending that night is fairly direct if you stay on the main highway, 90E/14E towards Spearfish, then on to Deadwood. We took that route to Spearfish, but then we decided to take the Spearfish Canyon Scenic Byway instead of driving the direct, 20 minute route to Deadwood. It added about 30 minutes to the travel time (20 minutes to 50 minutes), but ended up being so incredibly worth it.

In fact, that scenic byway was probably in the top 3 things we did on our trip. If you have an opportunity to drive through - do it! It's awesome.

We stopped when we got to a branch on the highway - there was a restaurant on one side of the road and the Spearfish Canyon Lodge on the other side of the road. We actually almost stayed at the lodge, but ultimately opted for a hotel in Deadwood where we could walk to some restaurants and casinos. But the lodge was really gorgeous, so if we were to go back to the area, we'd definitely stay there for a night! We stretched our legs a minute and I followed the sound of running water to this little fall - Little Spearfish Creek. 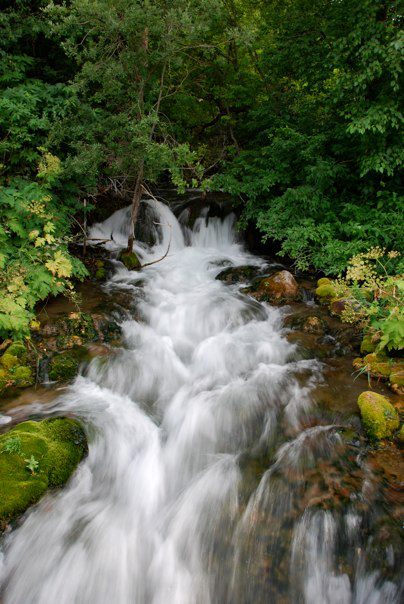 Then we took Roughlock Falls road and followed the signs to the Dances With Wolves film site! 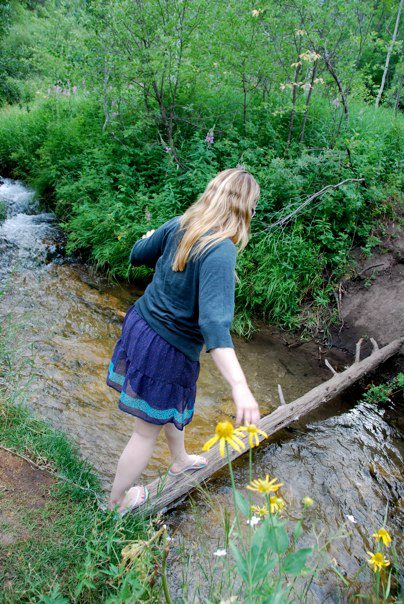 We thought about crossing the creek to get to the site, but we were all in bad shoes for it - flip flops! - so this was as far as we made it!

We then backtracked on the road to Roughlock Falls. This was another place at the top of our list of favorite places! It was stunning, and when you walked down the path to the base of the creek, it was peaceful and gorgeous and a reprieve from the heat we'd been in!

Travel tip: If you do go to Roughlock Falls, there are some really lovely picnic areas, and some spots on the creek above the falls that you can wade into the creek. But the bathrooms there? SO not good. They were basically a hole in the ground with a toilet seat in a concrete box with no lights or windows. So beware, and use the restrooms at the Spearfish Canyon Lodge before you hit the falls! 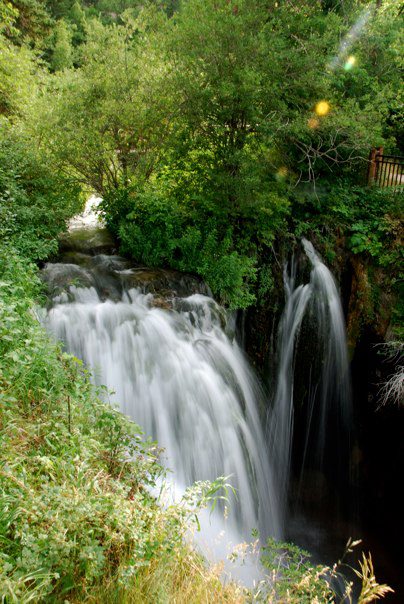 The falls from the first overlook. 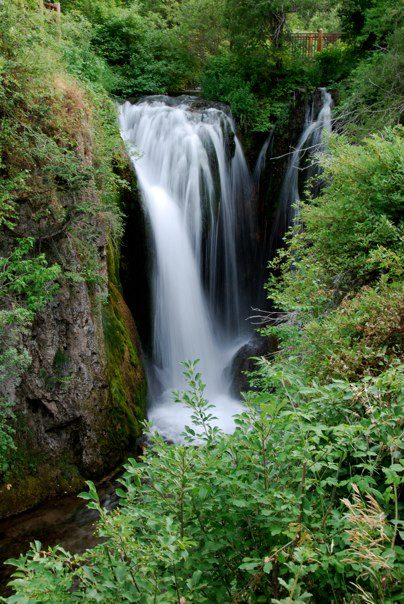 From a vantage point about halfway down the trail to the bottom. 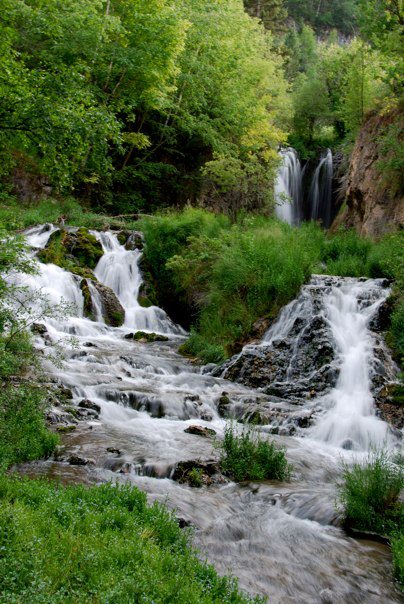 The falls and the creek from the bridge at the base of the hike!

After our respite at Roughlock Falls, we completed the drive through the scenic byway to Deadwood, SD. We were hot and tired by the time we got to our hotel, so we relaxed for a minute bit before hitting the town for dinner!

We were still in search of buffalo burgers, so once we were walking around Deadwood, SD, that was our main goal. We ended up finding them at Diamond Lil's restaurant in Kevin Costner's Midnight Star casino... Not only did we get delicious buffalo burgers, but there was the bonus of checking out a ton of displayed costumes from Costner films! 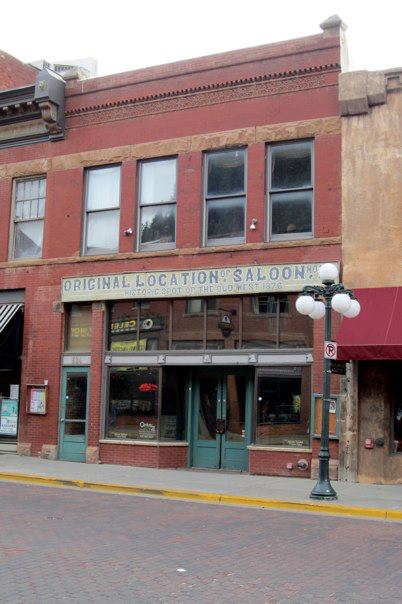 After dinner we wandered around Deadwood some more, gambled a little bit in a few casinos, then crashed at the hotel. Long road trips? Don't really lend to extensive night life - you're more exhausted than you expect from being in the car all day!

One thing we found interesting (and kinda disturbing!) about South Dakota were the street signs that they place signs on the highway where there have been fatal accidents reminding people to think and stay safe. One side says "THINK! X Marks the spot," and the other side says "Why Die?" They were certainly effective, but it was so strange! 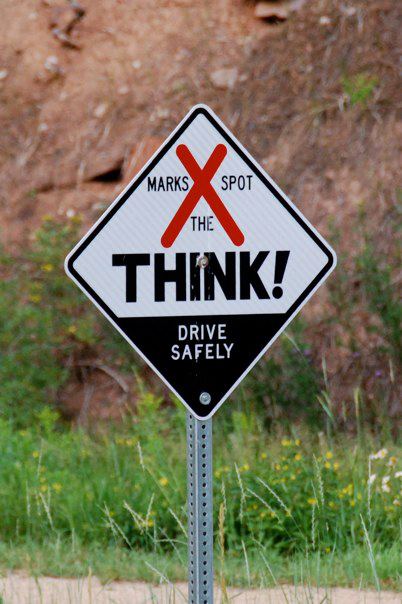 Up next: Our last day in South Dakota, where we packed the day full with Mount Rushmore, Custer National Park, and Rapid City!
Posted by addy at 4:37 PM