I recently found a pretty great article on summer airfare to Europe on farecompare.com, and they've quelled a little of my anxiety about how much our flights will cost for next year.

The article, Summer Airfare to Europe, helps answer the question I've been contemplating since we found out we were going to Italy: When to buy our tickets. The short answer? Sometime between January, at the soonest, through March of next year. But what I found most interesting about this article was the table it has - it's a graph that shows the prices of airfare for the first half of 2009 vs. the first half of 2010. 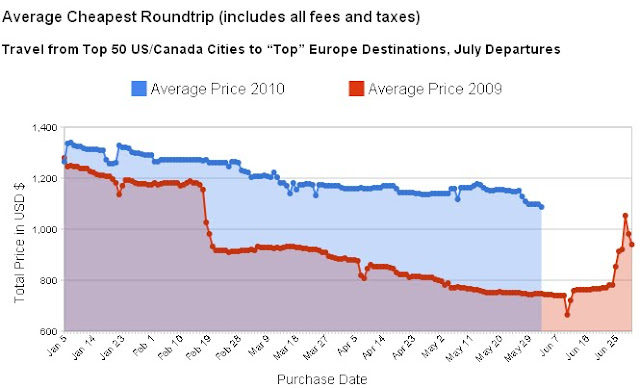 It's a little tough to see here, but it clearly shows how much lower ticket prices to Europe (with a July departure date) were in 2009. We went to Ireland last year, mainly because I found fantastic ticket prices. And the prices I found? I found right at that lowest dot on the graph - around June 12 of 2009. Our round trip tickets from LA to Dublin? $482 each, after taxes.

So, I had been having a REALLY hard time with the fact that ticket prices for Europe are so astronomical now. But then I read the above article, and realized that the 2009 prices were the anomaly, not the 2010 prices. Bummer. Time to adjust my mindset.

My new, revised plan is to hold off until January to buy airline tickets. This takes some of the pressure off by giving us a little more time to save. And, with any luck, we'll find tickets in that $1,000-$1,200 range, rather than the $1,500 range.

I commented on the article and got a response from the author, and it made a lot of sense. She said:


"I think it's a little too soon to shop for Europe, although right now I'm seeing roundtrip flights in early June 2011 for LAX-Rome for just a shade under $1200. That's not bad, but that price will probably increase by adding cities (I know you mentioned flying in and out of different cities). Couple of thoughts - I'd wait til after the first of the year; AND, I'd consider flying in and out of a "cheaper" European city - Dublin, maybe - and from there, doing a roundtrip to your Italian destination(s). Have a wonderful adventure."


Her comment got me thinking about other combinations of how to get people to the wedding - flying round trip to Rome instead of into Rome and out of Venice; flying round trip to Dublin and then getting cheap Aer Lingus flights to Rome and from Venice. Right now, both of those methods would end up costing the same amount as flying direct once you consider the additional flights and train rides, but I'll definitely keep an eye on them. At some point, it may be beneficial.

So now, the new question becomes: How long do you wait to get tickets? It looks like tickets get cheaper as you get closer to your departure date, but at what point do you suck it up and buy them to ensure that you actually get a seat on a good flight?