Off The Beaten Path in Portugal

One of the things we like the most about exploring a new place is checking out places that are along our journey from one place to another. 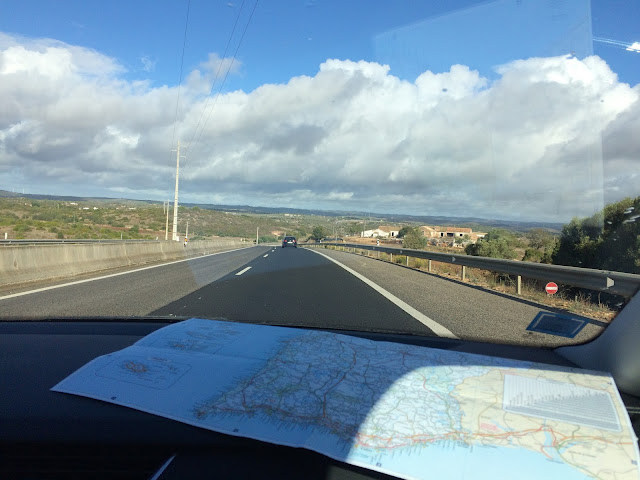 Hitting the road - and using an actual map rather than GPS!

Knowing we like to do this, we planned basically an entire day each for the drives between the Algarve and Sintra, and from Sintra to Porto, even though we'd spaced out our overnights so we never had more than about 200 miles to drive each day.


Hubby and I have slightly different travel styles - I LOVE to plan, and he, well, doesn't - so we compromise by building in lots of time to just wander around. I identify 1-2 places I know I want to visit along the way, then we play it by ear for the rest of the trip. Here are a couple of the cool places we got to see because we wandered.

LAGOS TO SINTRA
We left Lagos around 10:30am to head up to Sintra. Google Maps told us it was about a 325 km (200 mile) trip that should take about 3 hours, but we decided to take smaller roads rather than the main highway (A2) that we'd used to get to Lagos from Lisbon. We wanted to explore the south western coast of Portugal a bit. Because we'd already visited Sagres we cut up from Lagos to the coast near Aljezur. 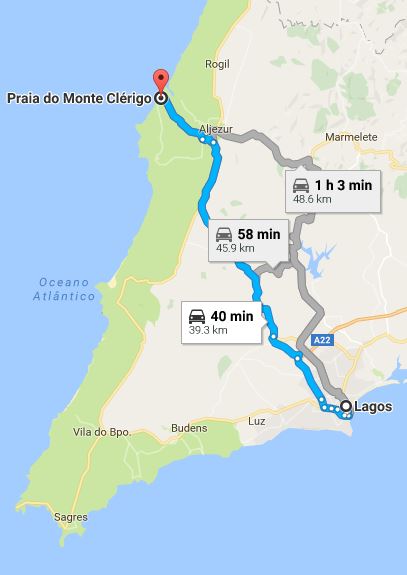 We decided right away that we wanted to see the ocean, so we headed towards the ocean and ended up at an awesome little beach town called Praia do Monte Clérigo. It was very small - some houses and vacation rentals, a couple of shops that were closed for the season, and a couple of restaurants/cafes. We hopped out of the car, explored the wide beach for a bit, then had a nice coffee at a café on the sand before getting back on our way. 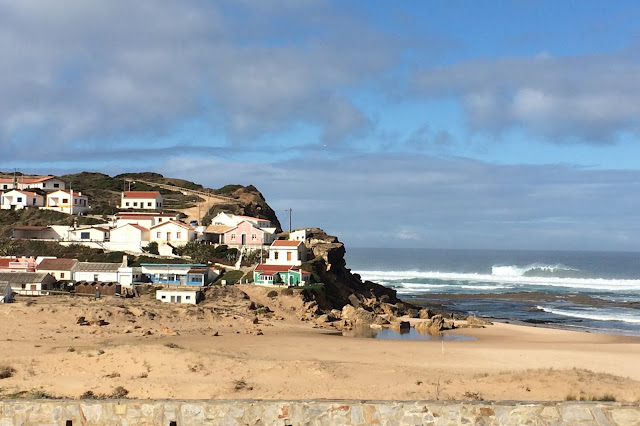 View of the town from the road heading in.

Panoramic view of the beach! 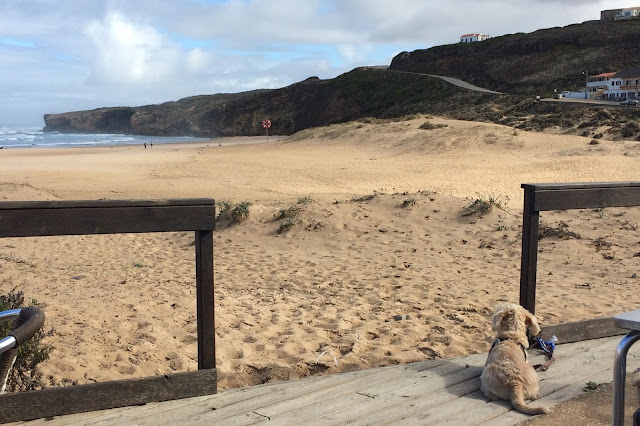 Dogs weren't allowed on the beach (even though several people were playing with their dogs on the beach anyway!), so this one chilled with his family on the cafe patio while we had our coffees!

Our next detour was once again to see the ocean - we saw the signs for Odeceixe and thought we might be able to get to the coast and drive north along it. So we drove through the little town of Odeceixe, which had charming rows of colorfully painted houses and a windmill, then followed the river down to the ocean. 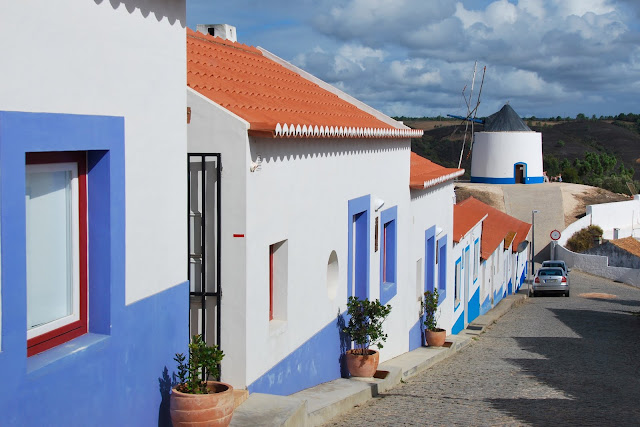 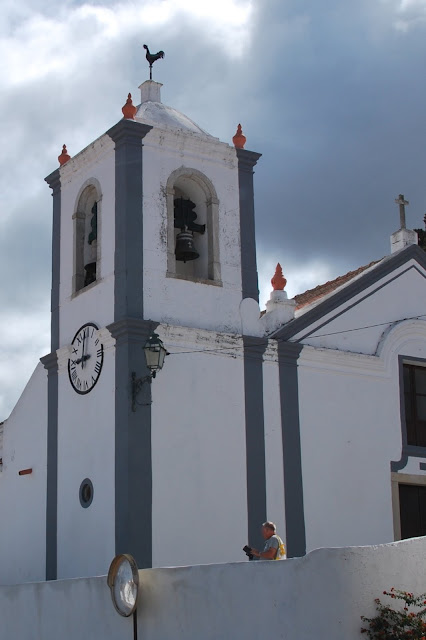 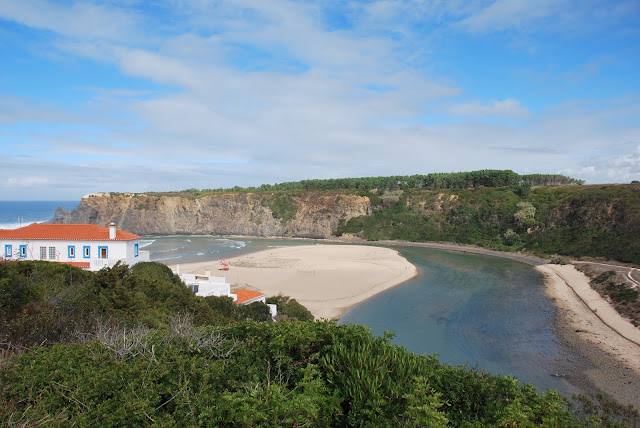 Where the river and the coast meet in Odeceixe.

We didn't find much at the coast this time - there was a nice beach you could walk down to, and it looked like there were some shops or cottages, but we'd just had coffee, so we completed the beach loop and headed back on our way. 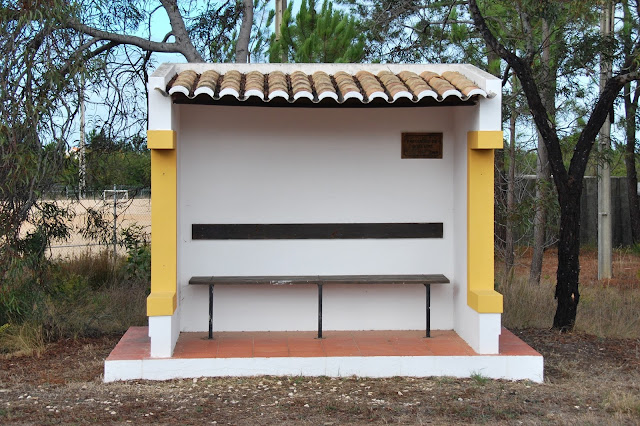 Even the bus stops are cool!

We headed north for a while along the N120 highway, and about 30 minutes in, we decided we were hungry enough for lunch so we branched off to Vila Nova de Milfontes. We got caught in a downpour while exploring, so we ducked into the first restaurant we could find, a cute little spot called Quebramatos Milfontes on Praia da Franquia where we could watch the rain blow through. 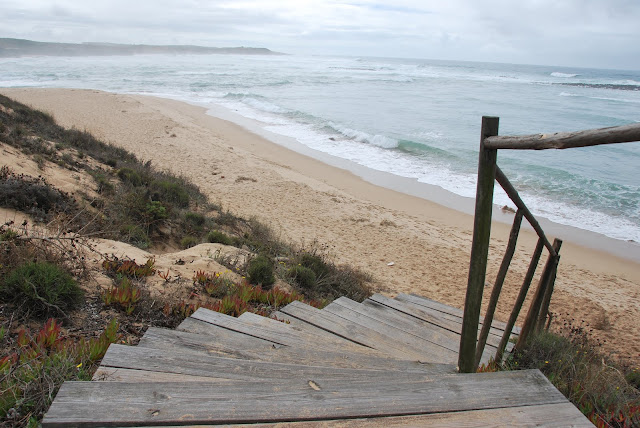 Steps down to a nice beach on the end of the point (Praia do Farol). We'd have checked it out but it was about to start pouring rain! 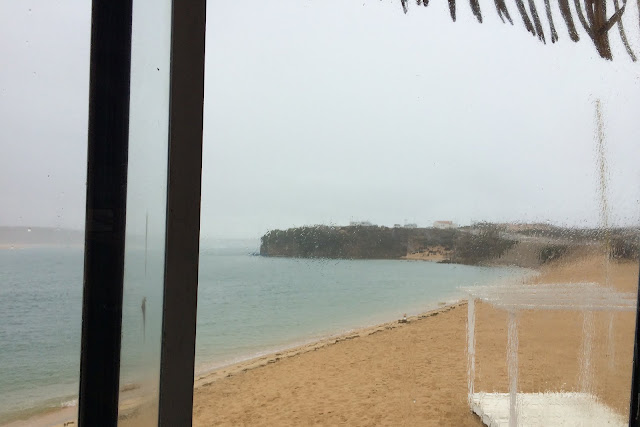 In came the rain while we were tucked away at Quebramatos Milfontes. 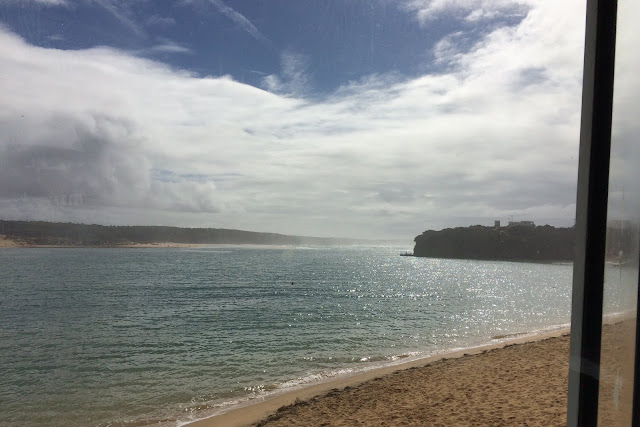 Before the end of our meal, the rain had passed and the beach was lovely and sunny (if a bit wet) again.

By this time, it was a bit later in the day than we'd planned, so we took off towards Sintra instead of exploring the town more. I'd love to go back someday, as it seemed like a nice place. There was even a castle you can check out: Forte de Milfontes. 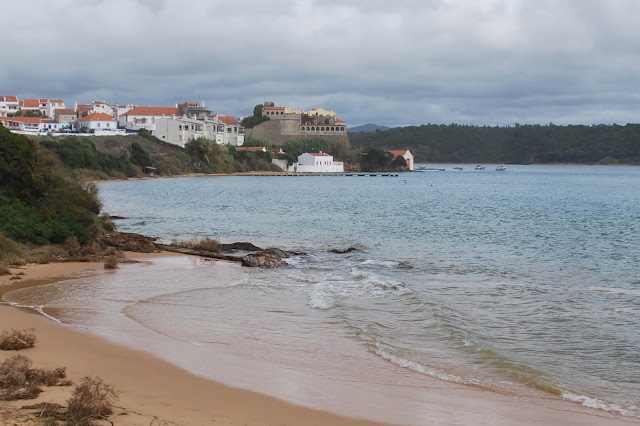 View of the Forte de Milfontes from where we had lunch.

From Vila Nova de Milfontes, we followed the coast a bit longer, detouring through Sines before cutting inland towards Grandola. We got lost for a bit trying to reach Grandola, so instead of stopping for another quick break, we got back on the A2 main highway for the rest of the journey to Sintra! 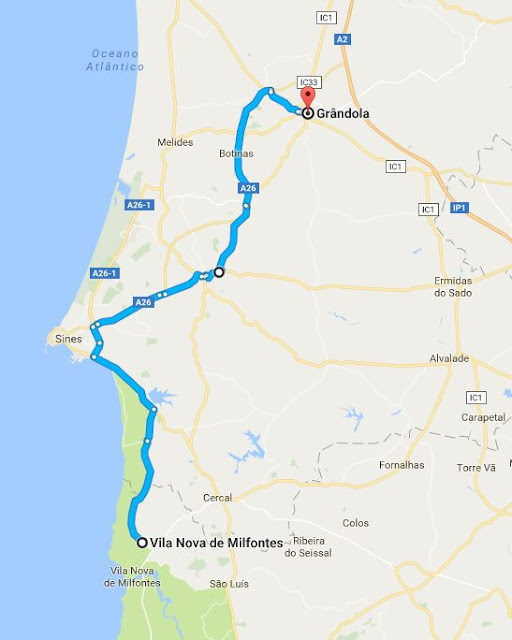 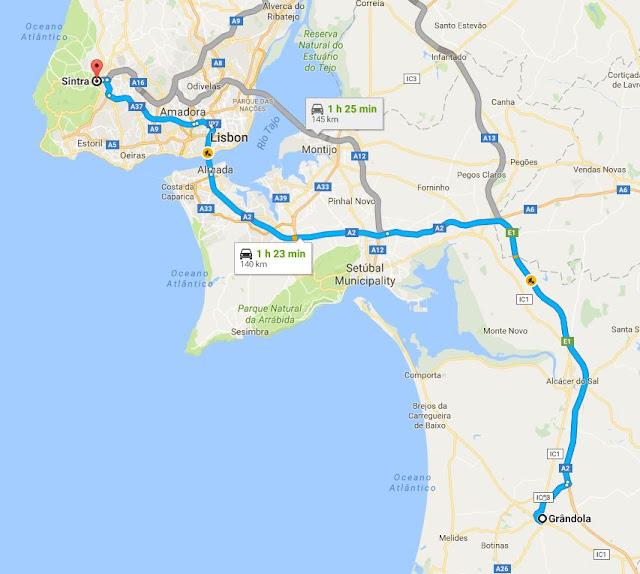 Total travel time from Lagos to Sintra: About 8 hours including stops.

We left Sintra around 10am, and before we left, Google Maps told us it was about a 330 km (205 mile) trip that should take about 3 hours. But again, we decided to take side roads and wander our way up to Porto!

Our drive from Sintra to Porto started out with an excursion to the Cabo da Roca, the westernmost point of continental Europe. More on that, later, since it was one of the highlights of the trip for me!

Once we got on the road up towards Porto after Cabo da Roca, we got a bit lost adventurous and ended up exploring a bit of the area on the way to finding the main road again. Hubby took advantage of not knowing where we were to visit some additional beaches, including one that was about a mile down a very bumpy dirt road, and another with some great surfing potential. 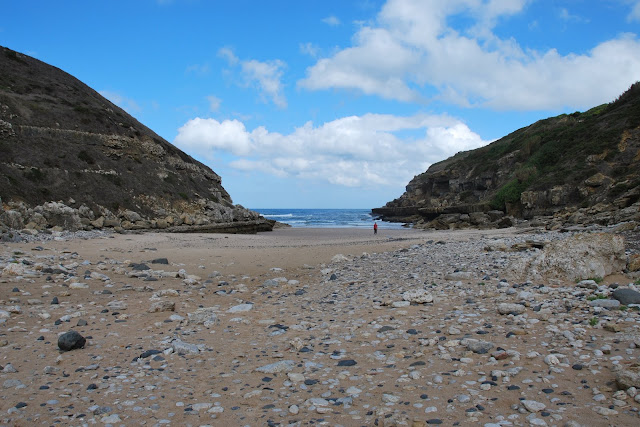 Praia da Samarra has some very interesting geology, and near where the riverbed meets the ocean is a Neolithic burial place from 1800 - 1400 BC! 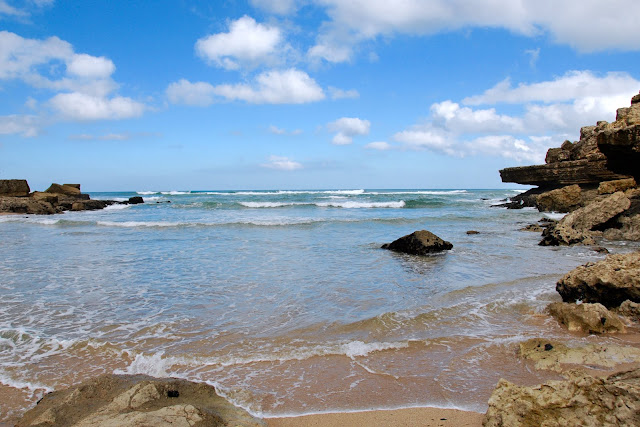 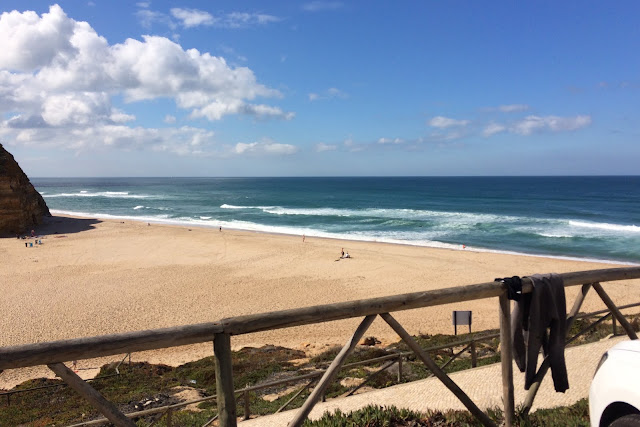 Gorgeous beach that we stumbled upon - Hubby was especially excited about the surf swell!

We stopped for fuel (and candy bars, of course) in Praia da Areia Branca, sorted out where we were, exactly, and cut back inland to the larger highways.

TRAVEL TIP: We found that parts of Portugal aren't always well marked on the roads. This is definitely where GPS and Google Maps on our phones came in handy, but we also didn't really mind being lost, as we were finding cool things along the way and didn't have a time crunch. Just remember that if you go off the beaten path it's sometimes a bit complicated to rejoin the path you need! 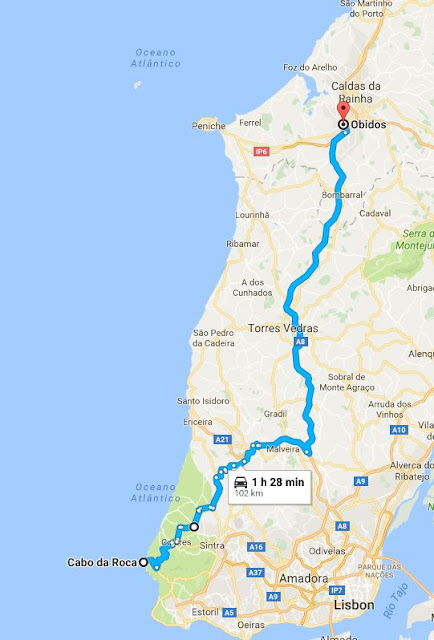 After an accidental stop off in Óbidos for lunch, we headed towards Aveiro, another spot I'd discovered on Pinterest. It's known as the "Venice of Portugal" due to its canals and boats, so I thought it might be worth checking out. 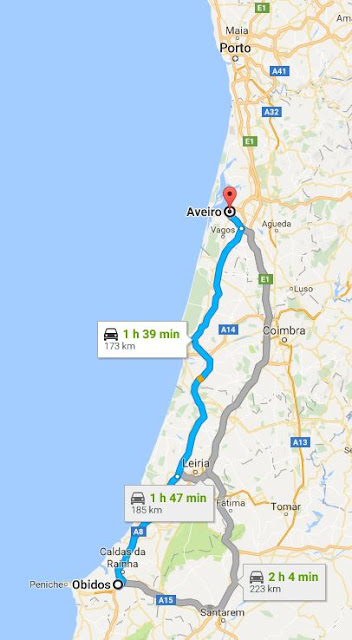 When we got there, however, we were a bit burnt out on how touristy it is. I think if circumstances were different we might have stopped for a coffee or ice cream, but since we didn't find parking on our first trip around the main part of town, we headed back towards the highway, with a quick detour to a very empty marina when hubby spotted sailboats. 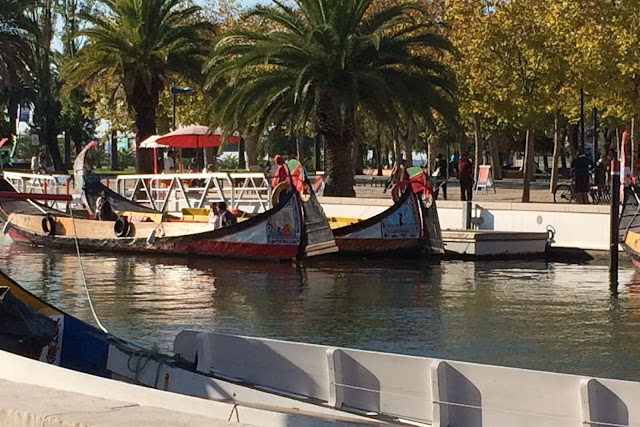 Gondola style boats on the main canal in Aveiro. 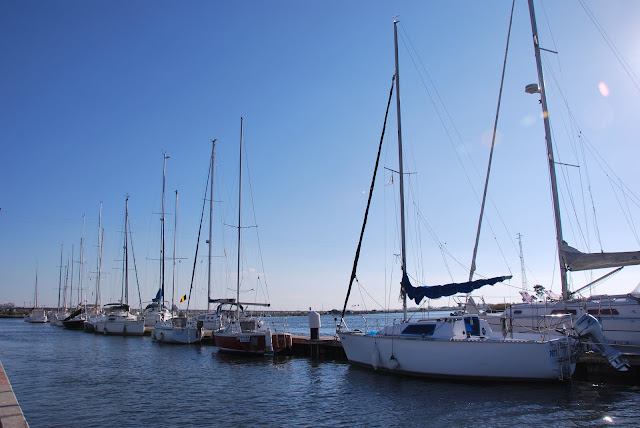 Sailboats at a marina in Aveiro.

From Aveiro, it was a fairly quick hour long drive to Porto. 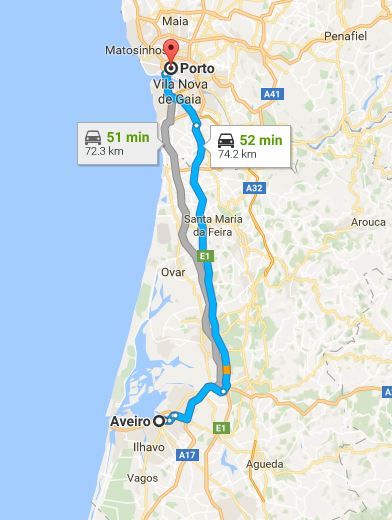 Total travel time from Sintra to Porto: About 8 hours including stops.

We really loved that we rented a car and decided to drive on our trip rather than taking trains. We got to explore, get off of main roads, and really see a lot more of Portugal than we would have if we'd only stuck to the main cities. I highly recommend renting a car for your trip!

Check out more Portugal posts HERE!
Posted by addy at 5:55 AM